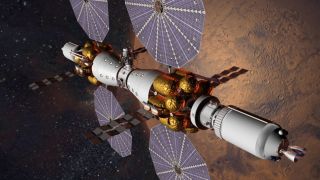 Artist's illustration of a human outpost in orbit around Mars.
(Image: © Lockheed Martin)

Lockheed Martin has launched its campaign to establish a "Mars Base Camp" — a vision for sending humans to Mars by 2028.

In its Mars Base Camp concept video, the aerospace company Lockheed Martin lays out a plan that would transport astronauts from Earth to a Mars-orbiting science laboratory, where they could perform real-time scientific exploration, analyze Martian rock and soil samples,and confirm the ideal place to land humans on the surface.

Lockheed Martin foresees launching this orbiting science station in 2028, setting the stage for a human landing mission in the 2030s.

The elements of Mars Base Camp are:

As detailed by Lockheed Martin, the major components of the architecture will be launched separately. Some will be pre-positioned in Mars orbit ahead of time.

Other components are assembled in Earth-moon space for the journey to Mars. Six astronauts would launch on Orion, which serves as the heart of the Mars Base Camp interplanetary ship.

Leonard David is author of "Mars: Our Future on the Red Planet," to be published by National Geographic this October. The book is a companion to the National Geographic Channel six-part series coming in November. A longtime writer for Space.com, David has been reporting on the space industry for more than five decades. Follow us @Spacedotcom, Facebook or Google+. Original story published on LeonardDavid.com.