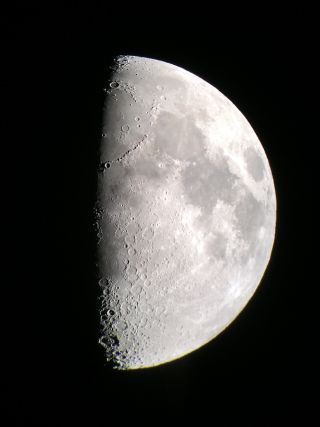 The first-quarter moon occurs on Friday, May 13. With the sun shining at a low angle across the center of the moon, it's the best time of the month to observe the moon's "seas" and craters.
(Image: © Imelda B. Joson and Edwin L. Aguirre)

When is the best time to look at the moon? Contrary to what you might think, it is not during the full moon. At that time, the sun is shining on the moon from straight overhead, making Earth's satellite look like the desert at high noon: flat and uninteresting.

The best viewing times are close to the quarter moons, when half the moon's surface is illuminated from Earth's perspective. This month, first quarter falls on Friday, May 13 (or Friday the 13th), and last quarter on Sunday, May 29. At those times, the sun is either rising or setting on the center of the moon, casting the lunar topography into sharp relief patterns of light and shadow. [Jupiter, Virgo Cluster and More in May 2016 Skywatching (Video)]

For most people, first quarter is easier to observe, because the moon is riding high in the early evening sky. The last-quarter moon is at its best at dawn, so is mainly appreciated by early risers.

Any night within four or five days of first quarter shows the moon's surface relief to best advantage. Those details are strongest along the line that divides light from shadow, called the lunar terminator.

With binoculars you can easily spot the moon's major surface features. Steadying your binoculars on a tripod will help with the view.

Early observers of the moon were not aware that it was an airless, desert world, and looked for features similar to those here on Earth. These viewers thought the vast lava plains that make up much of the moon's northern half were seas, and gave these areas fanciful names, using the Latin name "mare," pronounced "mah-ray," plural "maria," pronounced "mah-ray-ah."

If you have access to even the smallest telescope, you will be able to see and identify hundreds of craters, which are small features caused by the impact of asteroids early in the moon's history. These have fresh, sharp outlines that deceptively suggest a recent formation, but in fact most were formed billions of years ago, long before there was any life on Earth. With no atmosphere to cause erosions, these scars remain as fresh as the day they formed.

The chart above shows some of my favorite craters. Theophilus is the northernmost of a triplet of craters, with its companions Cyrillus and Catharina to the south. On the northern "shore" of the Mare Serenitatis lies Posidonius, a large crater filled with lava, scarred from later impacts by smaller asteroids. Closer to the terminator is Aristoteles.

The craters on the moon are named after famous scientists and philosophers. This naming tradition has continued to the present day and includes scientists who were alive as recently as the 20th century. The only living persons with lunar craters named after them are the surviving Apollo astronauts.

Editor's note: If you capture an amazing photo of the moon during its quarter phase and would like to share it with Space.com and our news partners for a story or gallery, you can send images in to spacephotos@space.com.