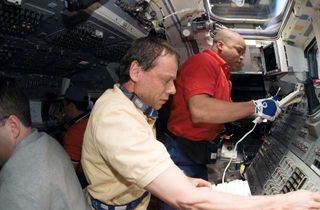 CAPECANAVERAL, Fla. -- Sevenastronauts are spending what is expected to be their last full day in orbitaboard NASA's space shuttleDiscovery today as their 13-day flight to the International SpaceStation (ISS) draws towards its close.

Discovery'sSTS-116 astronauts, commanded by veteran spaceflyer Mark Polansky,will put their orbiter through its reentry paces during a series of flightsystems checks later today in preparation of their planned Friday return.

"It was atrue team effort, and I think this mission really showed that," Polansky toldflight controllers Wednesday. "We are really looking forward to getting back tosee a great holiday."

NASAmission operations representative Phil Engelauf saidWednesday that Discovery appears to be in fine shape for a Friday landing. Theresults a finalinspection of the orbiter's heat shield are expected to be announced duringa NASA mission status briefing later today.

In additionto their standard pre-landing Flight Control Systems checks, Discovery'sSTS-116 crew will spend time today stowing some last-minute cargo items andsetting up a special recumbent seat for EuropeanSpace Agency astronaut Thomas Reiter. Unlike the Discovery astronauts, whohave been in orbit for just over 11 days, Reiter is returning to Earth afteralmost half a year of in space as an ISS crewmember [image].

Discoveryastronauts successfully launched two smallpayloads from the aft end of the shuttle's cargo bay late Wednesday andplan to deploy one more before the end of today.

STS-116mission specialists ChristerFuglesang and JoanHigginbotham fired a pair of spring-loaded experiments into orbit to kickoff experiments sponsored by the U.S.military.

"Houston, we have a successful MEPSIdeploy," Fuglesang said.

At 8:56p.m. EST (0156 Dec. 21 GMT), the astronauts deployed the Radar FenceTransponder (RAFT): a pair of five-inch (12.7-centimeter) wide cubes built bystudents for the U.S. Naval Research Laboratory to test the limits of themilitary's Space Surveillance Radar Systems in Texas, Alabama and Arizona. Thesmall cubes are also designed to relay messages for display across the Internetas well a being capable of beaming a digitized voice, NASA officials said.

MEPSI tookphotos of Discovery, which were later relayed to the shuttle's crew, as itdeparted and RAFT was successfully detected by its users as it passed over Oregon, Mission Control reported.

Theastronauts are expected to deploy a small atmosphere-observing satellite dubbedANDE at about 1:19 p.m. EST (1819 GMT) today.

Polanskyand his crewmates are due to land at one of three NASA shuttle runways either in Florida, New Mexico or California.

While exactlanding site, however, will depend on weather conditions at the time, NASA ishoping to put Discovery down here at the Kennedy Space Center (KSC), where theshuttle launchedspaceward on Dec. 9, to minimize turnaround time and costs.

Engelauf saidflight controllers plan to attempt a 3:56 p.m. EST (1856 GMT) landing at KSC during Discovery's first returnwindow Friday, which occurs during the shuttle's 202nd orbit aroundEarth. A subsequent orbit offers landing opportunities at KSC, White Sands Space Harbor in New Mexico and Edwards Air Force Base in California--in that order--though thetarget runway would likely be tapped before Discovery is due to leave orbit, headded.

"More thanlikely we will pick a site to aim for on each [revolution] and get in there," Engelaufsaid, adding that the window in which to fire Discovery's engines to make anyof the three landing strips spans only six minutes. "It's a really shortdecision time and you pretty much have to make your mind up before you getthere."

"Theflexibility you guys maintained to finish this mission was outstanding," said NASAastronaut Kevin Ford, serving as spacecraft communicator for the first of threeflight controller shifts working with Discovery's crew. "Have a MerryChristmas, happy holidays and you guys have a safe trip home."