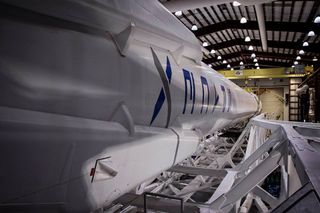 SpaceX's Falcon 9 rocket sits in the hangar at Cape Canaveral Air Force Station in Florida ahead of the planned May 6, 2016 launch of the JCSAT-14 communications satellite.
(Image: © SpaceX)

SpaceX will try to launch a Japanese satellite and land the first stage of its Falcon 9 rocket on a ship at sea during a satellite launch early Friday morning (May 6), and you can follow all the spaceflight action online.

The landing attempt will come during the launch of the JCSAT-14 commercial communications satellite for SpaceX customer SKY Perfect JSAT Corp. of Japan, which is scheduled to take place from Florida's Cape Canaveral Air Force Station at 1:21 a.m. EDT (0521 GMT) Friday. You can watch the launch live here at Space.com, courtesy of SpaceX.

You can also watch the launch and landing attempt live directly via SpaceX, at http://www.spacex.com/webcast or https://www.youtube.com/watch?v=L0bMeDj76ig.

SpaceX pulled off an ocean landing last month, during the launch of the company's robotic Dragon cargo capsule to the International Space Station (ISS). But company representatives aren't optimistic that Friday's touchdown try — on a robotic ship stationed in the Atlantic Ocean called "Of Course I Still Love You" — will have as much success; the launch will send JCSAT-14 to a more distant geostationary transfer orbit (GTO), so the Falcon 9 will be traveling much faster when it comes back to Earth.

"Given this mission's GTO destination, the first stage will be subject to extreme velocities and re-entry heating, making a successful landing unlikely," SpaceX representatives wrote in a mission description.

Such landing attempts are part of SpaceX's effort to develop fully and rapidly reusable rockets — a key priority for the company and its billionaire CEO, Elon Musk, who has said such technology could cut the cost of spaceflight by a factor of 100.

SpaceX has had touchdown successes both on sea and on land; this past December, the company brought a Falcon 9 first stage down softly on terra firma at Cape Canaveral during a satellite launch.

The JCSAT-14 liftoff was originally scheduled for early Thursday morning (May 5), but bad weather on Florida's Space Coast pushed the attempt back a day.