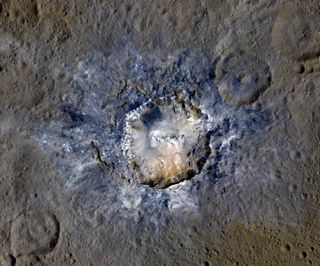 NASA's Dawn spacecraft took this enhanced-color view Haulani Crater on the dwarf planet Ceres. Blue areas such as those seen in this image have been associated with young features on Ceres. Image released April 19, 2016.
(Image: © NASA/JPL-Caltech/UCLA/MPS/DLR/IDA)

A strange crater on Ceres seems to be warning spacecraft not to land on the dwarf planet's battered surface.

"The crater's polygonal nature (meaning it resembles a shape made of straight lines) is noteworthy because most craters seen on other planetary bodies, including Earth, are nearly circular," NASA officials wrote today (April 19) in a description of the newly released images. "The straight edges of some Cerean craters, including Haulani, result from pre-existing stress patterns and faults beneath the surface." [Photos: Dwarf Planet Ceres, the Solar System's Largest Asteroid]

Dawn has been orbiting the 590-mile-wide (950 km) Ceres, the largest object in the main asteroid belt between Mars and Jupiter, since March 2015.

Over the past 13 months, Dawn has been studying the dwarf planet in a series of successively closer-in orbits. The probe reached its final orbit, which lies just 240 miles (385) from Ceres' surface, this past December.

One newly released image of Haulani Crater was captured from this superlow altitude, and another was snapped at a distance of 915 miles (1,470 km) from the surface. Both photos show Haulani's straight-edge nature, and the latter, an enhanced-color view, shows bluish material that was ejected during the recent impact that created Haulani.

"Haulani perfectly displays the properties we would expect from a fresh impact into the surface of Ceres," Martin Hoffmann, of the Max Planck Institute for Solar System Research in Göttingen, Germany, the co-investigator on the Dawn framing camera team, said in the same statement. "The crater floor is largely free of impacts, and it contrasts sharply in color from older parts of the surface."

The new images also reveal evidence of landslides on Haulani's rim, NASA officials said. In addition, the false-color photo shows bright material on the crater's floor. Mission scientists think these bright spots on Ceres — the most famous collection of which sits at the bottom of 57-mile-wide (92 km) Occator Crater — are composed of salts that are much more reflective than the surrounding terrain.

Ceres' Oxo Crater, a young feature about 6 miles (10 km) across, also harbors this reflective material. Indeed, Oxo is the second-brightest feature on Ceres, behind only Occator, NASA officials said.

One of the newly released photos shows Oxo in detail, showcasing the odd "slump" in its rim where large amounts of material have fallen below the surface. Oxo is interesting in other ways as well; the composition of minerals on its floor appears to be different from that of other craters, NASA officials said.

"Little Oxo may be poised to make a big contribution to understanding the upper crust of Ceres," said Dawn principal investigator Chris Russell, of the University of California, Los Angeles.

The $467 million Dawn mission launched in September 2007 to study Ceres and the 330-mile-wide (530 km) protoplanet Vesta, the asteroid belt's second-largest denizen. Dawn orbited Vesta from July 2011 through September 2012, when it departed for Ceres. The spacecraft is scheduled to continue studying Ceres through this coming June.

Dawn is the only probe ever to orbit a dwarf planet, and the only one to orbit two celestial bodies beyond the Earth-moon system.