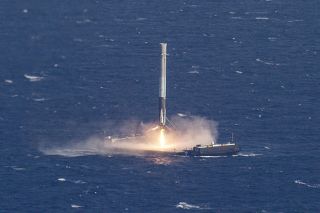 The Falcon 9 1st stage stand proud atop the automated drone ship "Of Course I Still Love You" in the Atlantic Ocean after the first successful ocean landing of the vehicle on Friday.
(Image: © SpaceX)

When a SpaceX Falcon rocket flew itself back to its Florida launch site last December, the feat was hailed as a key step in company founder Elon Musk's quest to develop an inexpensive, reliable reusable rocket. But that was just half the story.

The more challenging and potentially revolutionary step was accomplished on Friday when another Falcon rocket dispatched a cargo ship to the International Space Station, then turned around and landed on a platform gently bobbing in the Atlantic Ocean.

"And they said it couldn't be done (at least no one has ever done it) until, of course, you did it," former NASA space shuttle manager Wayne Hale wrote in a congratulatory note to SpaceX on Twitter.

SpaceX would prefer to fly its rockets back to the launch site, saving the time and expense of dispatching one of its floating landing pads and a fleet of recovery ships, but most of its satellite-delivery missions won't have enough fuel left over for the rocket to make it back to land.

"I think this was a really good milestone for the future of spaceflight, I think it's another step toward the stars," Musk told reporters after the landing.

The Falcon rocket that launched a Dragon cargo ship toward orbit on Friday likely could have made it back to the launch site, but SpaceX opted to use the mission to test its sea-landings again. Four previous attempts to land a rocket on a barge, or what SpaceX calls a "drone ship" were not successful.

"We decided we wanted to go for the drone ship and see if we could get a successful landing," Hans Koenigsmann, SpaceX vice president for flight reliability, said before Friday's touchdown.

"The next two or three flights are going to be drone ship landings — there's no choice there … It's a good opportunity for us to refine our drone ship landing capabilities and get this done because in the long run, that's certainly something that we need to demonstrate over and over again to get the first stages back."

SpaceX isn't the only firm looking at landing its rockets at sea. Jeff Bezos' space company, Blue Origin, was granted a patent for a sea-based rocket landing system, but SpaceX successfully contested the claim.

In an interview with Discovery News last month, Bezos and Blue Origin President Rob Meyerson declined to comment on whether further patents are pending, but Bezos did say that it is absolutely essential to be able to recover rockets at sea rather than flying with the weight of the extra fuel needed to get back to land.

Blue Origin declined to comment on Saturday about SpaceX's landing at sea.

The rocket will be taken to SpaceX's new launch site at the Kennedy Space Center and test-fired about 10 times, Musk told reporters at a post-launch press conference.

If all that goes well, Musk wants to resell that rocket at a discount price to a commercial customer and launch it again with about two months.

"In order for us to really open up access to space, we've got to achieve full and rapid reusability," Musk said. "The cost to refuel our rocket — it's mostly oxygen on board — is only $200,000 to $300,000, but the cost of the rocket is $60 million … You still have your fixed costs, but in marginal costs, it's a hundred-fold reduction."

The Dragon cargo ship launched Friday reached the space station early Sunday. Its primary cargo, an inflatable space habitat built by Bigelow Aerospace, is scheduled to be attached to a berthing port on the station on Saturday. Astronauts, however, are not expected to inflate the habitat, which is flying as technology demonstration mission, until late May.