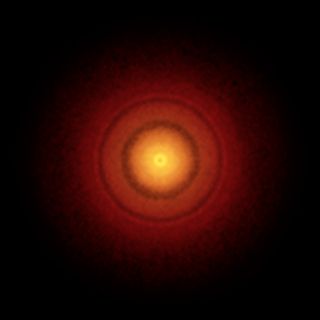 Scientists may have just snapped baby photos of an alien Earth.

The planet-forming disk around a nearby sunlike star called TW Hydrae sports a gap at about the same distance from the star as Earth lies from the sun, new images captured by the Atacama Large Millimeter/submillimeter Array (ALMA) in Chile reveal.

"Previous studies with optical and radio telescopes confirm that this star hosts a prominent disk with features that strongly suggest planets are beginning to coalesce," study lead author Sean Andrews, of the Harvard-Smithsonian Center for Astrophysics (CfA), said in a statement. [Meet ALMA: Amazing Photos from Giant Radio Telescope]

"The new ALMA images show the disk in unprecedented detail, revealing a series of concentric, dusty, bright rings and dark gaps, including intriguing features that suggest a planet with an Earth-like orbit is forming there," Andrews added.

The ultimate size of the newly forming planet is unknown. It may grow up to be about as hefty as Earth, or it could end up as a "super-Earth" (a world more massive than our own, but substantially less massive than the ice giants Uranus and Neptune), researchers said.

TW Hydrae was born just 10 million or so years ago. The star lies a mere 175 light-years from Earth, and its protoplanetary disk faces Earth, making the system a popular target for astronomers.

"TW Hydrae is quite special," study co-author David Wilner, also of the CfA, said in the same statement. "It is the nearest known protoplanetary disk to Earth, and it may closely resemble our solar system when it was only 10 million years old."

Andrews and his team used ALMA — a network of dozens of radio dishes high up in the Chilean Andes — to image the light emitted by tiny dust particles in TW Hydrae's planet-forming disk. ALMA was able to resolve details on the order of 1 astronomical unit (AU), researchers said. (One AU is the distance from Earth to the sun — about 93 million miles, or 150 million kilometers.)'

"This is the highest-spatial-resolution image ever of a protoplanetary disk from ALMA, and that won't be easily beat going forward," Andrews said.

The new photo also reveals gaps at 20 and 40 AU from TW Hydrae — about the same average distance at which Uranus and Pluto orbit the sun, respectively. These two gaps also indicate spots where planets are likely forming, researchers said.

The new study has been published in Astrophysical Journal Letters.