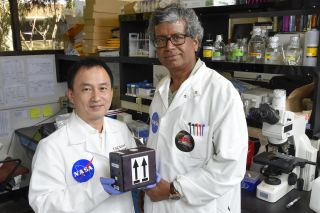 When most people think of the dangers astronauts face while living on the International Space Station, extreme events like meteor showers or oxygen leaks often come to mind. But fighting diseases on long-duration space missions could be just as crucial to astronaut safety.

One challenge is that medications may lose some of their potency in space, and not work as well as they would back on Earth. . So a team of researchers from the University of Southern California (USC) and NASA's Jet Propulsion Laboratory (JPL) plans to launch fungi into space. The goal is to develop new medicines for use both on the orbiting space station and the pale blue dot below.

"This is an ambitious project for NASA to see if we could have some breakthrough in space biology," Kasthuri Venkateswaran, senior research scientist at JPL and co-principal investigator in this study, said in a statement from the University of Southern California."NASA needs to develop self-sustaining measures to keep humans healthy in space, because calling 911 is not an option." [7 Everyday Things That Happen Strangely in Space]

Certain types of fungi produce molecules known as secondary metabolites that can be used to make crucial pharmaceuticals. But producing these molecules is not essential for the fungi's growth or reproduction, so they rarely produce them.

"These drug-producing organisms do not make all the drugs they can make," said Clay Wang, who led the study. "In most cases, the drug-producing pathways are silent. They only make the drugs when they need to," said Wang, a professor at the USC School of Pharmacy.

So the team of researchers has decided to send the fungi to the International Space Station, with the hope that the stressful environment will trigger the production of these secondary metabolites. Specifically, the team will look at a well-studied fungus called Aspergillus nidulans.

"The high-radiation, microgravity environment in space could prompt Aspergillus nidulans to produce molecules it doesn't create in Earth's less-stressful conditions," Wang said. "We've done extensive genetic analysis of this fungus and found that it could potentially produce 40 different types of drugs. The organism is known to produce osteoporosis drugs, which is very important from an astronaut's perspective, because we know that in space travel, astronauts experience bone loss."

Molecules from Aspergillus nidulans also have the potential to be used in anti-cancer, anti-fungal and Alzheimer's disease studies.

The researchers will send specimens of the fungus to the International Space Station aboard a SpaceX Dragon cargo capsule, atop the company's Falcon 9 rocket, which will launch from Cape Canaveral Air Force Station in Florida at 3:43 p.m. EDT (1943 GMT) on April 8. Once the samples reach the station, they will be placed in ideal growth conditions, at 37 degrees Celsius (98.6 degrees Fahrenheit), where they will remain for either four or seven days before they are cooled. After splashdown in May, the samples will be returned to USC for further study.

"This is the first project where we see an intersection between pharmaceutical science and space exploration," Wang said. "Drugs have an expiration date. NASA's human mission to Mars is expected to last anywhere from one to three years. Not all drugs are going to be stable in that time period, so the ability to make drugs in space will enable us to go further away from Earth and will also benefit future space explorations."