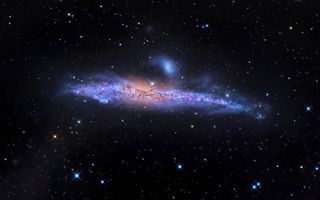 NGC 4631, known as The Whale Galaxy, has been found to have a few close neighbor galaxies, including NGC 4627.
(Image: © Copyright R Jay Gabany (Blackbird Observatory)/Collaboration by David Martínez-Delgado (University of Heidelberg), et al.)

A spiral galaxy scarcely 25 million light-years from Earth, The Whale Galaxy is similar in size to the Milky Way. Also known as NGC 4631, the galaxy has a brilliantly glowing elliptical sidekick as well as some other recently discovered neighbors that are dwarf galaxies. The galaxy is also surrounded by tidal star streams, fragments of a dwarf galaxy damaged by the gravitational effects of the Whale. [See more photos of galaxies across the universe.]