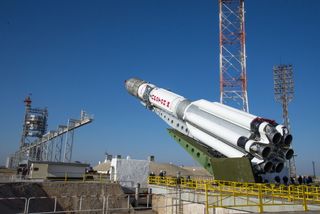 A Russian Proton rocket and its ExoMars 2016 payload are hoisted into vertical position at Kazakhstan's Baikonur Cosmodrome on March 11, 2016.
(Image: © B. Bethge/ESA)

The next robotic mission to Mars has rolled out to the launchpad ahead of its liftoff, which is planned for Monday (March 14).

A Russian-made Proton-M rocket carrying the Trace Gas Orbiter (TGO) and Schiaparelli lander — which together constitute the first part of the two-phase, European-led ExoMars mission — rolled out to the pad at Baikonur Cosmodrome in Kazakhstan today (March 11) and was hoisted into vertical position. Technicians had filled the Proton's Breeze upper stage with propellant and oxidizer yesterday (March 10), European Space Agency (ESA) officials said.

If all goes according to plan, the Proton will blast off at 5:31 a.m. EDT (0931 GMT; 3:31 p.m. local Kazakhstan time) on Monday. You can watch the ExoMars launch live here at Space.com, courtesy of ESA.

After liftoff, TGO and Schiaparelli will cruise through deep space for seven months, arriving at the Red Planet in October.

The pair will separate on Oct. 16. A few days later, TGO will set up shop in Mars orbit, beginning a five-year study of the planet's atmosphere that focuses on a hunt for methane — a gas that could be produced by living organisms, if any exist on the Red Planet.

Schiaparelli, meanwhile, will aim to pull off Europe's first-ever successful landing on Mars, with touchdown scheduled for Oct. 19. (ESA's Beagle 2 lander apparently settled softly on the planet in December 2003, but it never contacted its controllers after that.)

ESA wants Schiaparelli to gather environmental data on the surface for as long as its batteries last (likely two to eight days, ESA officials have said). But the lander's main purpose is to prove out entry, descent and landing technologies that will help get the second main component of the ExoMars program — a deep-drilling, life-hunting rover due to launch in 2018 — onto the red dirt safely.

TGO's observations will help mission planners select a landing site for this rover, and the orbiter will help relay data from the wheeled robot to Earth after it touches down.

NASA was ESA's main partner on ExoMars until early 2012, when the American space agency dropped out, citing budget issues. Russia then came onboard as partner. The Russian federal space agency, known as Roscosmos, is providing Proton rockets for both ExoMars missions, a landing platform for the ExoMars rover and some science instruments.