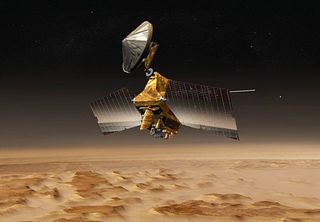 NASA's Mars Reconnaissance Orbiter (MRO) arrived at the Red Planet on March 10, 2006 and has done yeoman's work in the decade since. To mark the occasion, NASA created this video celebrating the MRO's 10 years at Mars.

MRO images Mars in unprecedented detail, and its observations have helped researchers keep tabs on the dynamic planet. MRO is also responsible for a number of important discoveries over the years —including the recent determination that water flows seasonally on some parts of modern-day Mars. [Flowing Water on Mars: The Discovery in Pictures]

"This mission has helped us appreciate how much Mars — a planet that has changed greatly over time — continues to change today," MRO project scientist Rich Zurek, of NASA's Jet Propulsion Laboratory in Pasadena, California, said in a statement.

To date, MRO has sent 264 terabits of scientific data back to Earth — more than all other interplanetary missions in history put together, NASA officials said. Some of the probe's observations help researchers evaluate possible landing sites for future robotic and human missions, and others aid route planning for NASA's two operational Mars rovers, Opportunity and Curiosity.

MRO also serves as a vital communications link between these two rovers and their handlers on Earth. (The agency's Mars Odyssey orbiter also provides this relay service.)

The $720 million MRO mission launched on Aug. 12, 2005, tasked with, among other things, studying Martian geology and climate and searching for evidence that Mars has ever hosted liquid water for long periods of time — long enough to potentially provide a habitat for life.

MRO's images and measurements have helped scientists flesh out their understanding of Martian history, showing that the ancient Red Planet harbored a variety of watery environments — and that things have changed a lot since then.

The solar-powered MRO carries six science instruments, including the High Resolution Imaging Science Experiment (HiRISE) camera, which is powerful enough to resolve features as small as a desk on the Martian surface.

Everything is still working well, even though MRO is now far beyond its original two-year science mission, NASA officials said.

"The Mars Reconnaissance Orbiter remains a powerful asset for studying the Red Planet, with its six instruments all continuing capably a decade after orbit insertion," Zurek said. "All this and the valuable infrastructure support that it provides for other Mars missions, present and future, make MRO a keystone of the current Mars Exploration Program."

When it first arrived at Mars, MRO slid into an elliptical orbit that took it as far as 27,000 miles (43,000 km) from the planet at times. But by September 2006, the probe had worked its way to a much closer, nearly circular orbit that features an altitude range of 155 to 196 miles (250 to 316 km), NASA officials said. MRO still occupies this orbit today.

MRO is one of five operational spacecraft orbiting the Red Planet. The others are NASA's Mars Odyssey and MAVEN (Mars Atmosphere and Volatile Evolution) probes; Europe's Mars Express spacecraft; and India's Mars Orbiter Mission, which is also known as Mangalyaan.

Long-lived as it is, MRO is not the most venerable member of this group; Mars Odyssey arrived at the Red Planet in October 2001, and Mars Express got there in December 2003. (The Opportunity rover has also put in more time at Mars than MRO has; Opportunity landed in January 2004.)