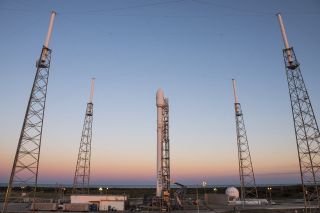 The SpaceX Falcon 9 rocket carrying the SES-9 communications satellite stands poised for its fourth launch attempt in two weeks at Florida's Cape Canaveral Air Force Station. The rocket is slated to launch Friday, March 4, at 6:35 p.m. ET, then try to land on a droneship at sea.
(Image: © SpaceX)

SpaceX is hoping the fourth time's the charm with its bid today (March 4) to launch a commercial satellite into space and then return its rocket booster to Earth to land on a barge.

The Hawthorne, California-based SpaceX is targeting a 6:35 p.m. EST (2335 GMT) blastoff from a pad at Florida's Cape Canaveral Air Force Station for its unmanned Falcon 9 rocket. You can watch a webcast of the launch live on Space.com, courtesy of SpaceX, which is offering two different video streams of the event.

On board the Falcon 9 rocket will be the SES-9 communications satellite, which SpaceX plans to deliver to geostationary transfer orbit for Luxembourg-based customer SES. SpaceX will also attempt to land the first stage of the Falcon 9 rocket on its drone ship, dubbed "Of Course I Still Love You." SpaceX has made several attempts to land on this automated platform, with no success. These attempts are related to the long-term goal of SpaceX (and its billionaire founder, Elon Musk) to develop a completely reusable launch system that could dramatically lower the cost of spaceflight. So far, SpaceX has managed a controlled rocket landing on land, in December 2015.

Over the past two weeks, SpaceX has made three attempts to launch the SES-9 satellite. On Feb. 24 and Feb. 25, SpaceX experienced problems loading liquid-oxygen propellant on to the rocket, forcing the launch to be pushed back.

For the third try, on Sunday (Feb. 28), SpaceX was initially ready to go, but a boat strayed into the mission's "keep-out" safety zone. The initial attempt was set for 6:45 p.m. EST (2345 GMT) but was delayed by 35 minutes to allow the boat to clear the area.

On Twitter, Musk suggested that the boat had prevented the rocket from launching on time. "Launch aborted on low-thrust alarm. Rising oxygen temps due to hold for boat and helium bubble triggered alarm," he wrote.

SpaceX's previous drone landing attempts took place in January 2015, April 2015 and January 2016. The rocket exploded on the deck each time, with the last failure happening due to a problem with one of the leg struts.

SpaceX representatives have stressed repeatedly that today's landing attempt will be an experiment, and that success is not guaranteed — or even expected.

"Given this mission's unique GTO [geostationary transfer orbit] profile, a successful landing is not expected," SpaceX representatives wrote in a description of the mission.