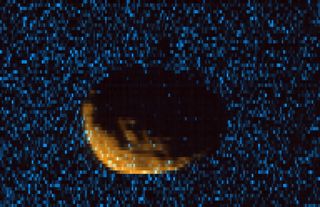 NASA's Mars Atmosphere and Volatile Evolution (MAVEN) orbiter grabbed this ultraviolet image of Mars' moon Phobos from within 186 miles (300 kilometers). The orange is mid-ultraviolet sunlight reflected off the moon's surface, and the blue is far ultraviolet light from the extended upper atmosphere of Mars.
(Image: © CU/LASP and NASA)

This eerie portrait of Mars' moon Phobos in ultraviolet light was snapped by the NASA orbiter MAVEN as their orbits crossed paths.

Phobos is the nearer and stranger of Mars' two moons — in the 1950s and 1960s, some scientists thought that its unusual orbit, spiraling inward, suggested that it might be a hollow, artificial body. The little moon has long, shallow grooves along its sides, likely caused by the pull of Mars, and it moves about 6.6 feet (2 meters) closer to the Red Planet every hundred years, NASA officials have said.

In fact, Phobos is the closest moon to its planet in the solar system, circling Mars at just 3,700 miles (6,000 kilometers) above its surface. It's so close that it orbits within the sphere of Mars' thin atmosphere — the blue pixels that form the new portrait's background are the ultraviolet light scattered from hydrogen gas in Mars' extended upper atmosphere. The orange comes from  longer ultraviolet wavelengths of sunlight reflected from the moon's surface.

NASA's MAVEN (short for Mars Atmosphere and Volatile Evolution) mission snapped the shot with its Imaging Ultraviolet Spectrograph in December 2015 as its orbit crossed paths with Phobos', and researchers are hoping MAVEN's measurements will help determine what the moon is made of, where it came from and whether it has organic molecules on its surface. (A previous measurement, by the Mars Express spacecraft, found evidence of such organic molecules.)

"The images will allow MAVEN scientists to better assess the composition of this enigmatic object, whose origin is unknown," NASA officials said in a statement.