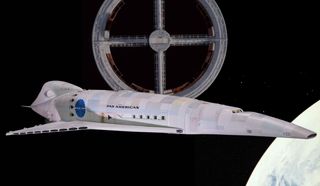 A model of the Orion III space plane from "2001: A Space Odyssey," made by professional prop-maker Stephen Dymszo, with contributions from Space.com's Infographics Artist Karl Tate. Background image is from the film.
(Image: © Karl Tate)

The futuristic space plane Orion III from the science fiction movie epic "2001: A Space Odyssey" has landed in Space.com's offices.

Our resident infographic master Karl Tate is what we'll call a megafan when it comes to Stanley Kubrick's 1968 film "2001: A Space Odyssey." So we weren't surprised when an extremely detailed model of the Orion III space plane appeared in his office. But we were impressed to learn that it might be the most accurate model of its kind in existence.

You can see photos of the model here and a clip of the film that includes the ship's exterior here. This was an entirely fan-made item; there are no officially licensed models of the ship available for purchase (or of any of the other ships from the movie, for that matter). The attention to detail is impressive, especially considering that the actual model used in the film was destroyed, so there was very little information to go on when re-creating it. [Stanley Kubrick's Iconic '2001: A Space Odyssey' Sci-Fi Film Explained]

In the film, the Orion III spaceship carries passengers from Earth to a handful of nearby destinations, including the Space Station V.

The ship is where Kubrick executed one of his many tricks to create the illusion of weightlessness: the floating pen was achieved by sticking the pen to a pane of glass (larger than the camera frame) and moving the glass in such a way as to make it look like the pen was floating in the air.

However, the interior scenes of Orion III were shot on a set; the exterior shots of the spaceplane were created using a photograph of the 4-foot-long (1.2 meters) model.

The Orion III model that appears in Tate's office started with this resin model that is available for purchase. The resin molds were made from a wood model carved by aerospace engineer Adam K. Johnson, who is also the author of "2001: The Lost Science," about the scientific infrastructure of the movie created by the filmmakers.

But customers who order the resin model won't get the same ship that Tate owns. That model was given a makeover by professional prop-maker Stephen Dymszo (who also made one for himself). Using various source materials, including some high-resolution images of the original model and blueprints for the cockpit interior, Dymszo said he added 286 additional parts to each model, and spent roughly 280 hours on each of them.

Some of the additional details include two probes that extend off the very back of the ship. Tate, a graphic designer, created blueprints for the probes, and the pair had them made out of stainless steel from a machine stop. The model also has stainless steel reinforcements to make it more durable, Dymszo said. Most of the additions were plastic strips and sheets for the exterior. Tate also made the Pan American logos, and created the designs for some of the other surface details.

Kubrick used extremely harsh lighting for the space shots (to mimic direct sunlight), which tended to wash out any details on the model, so the original creators used a colorful, patchwork paint job to give the ship more contrast. In the finished film, however, the ship looks almost uniformly gray. Dymszo's paint job is meant to look like the model itself; Tate said he is fully aware that the pastel colors might draw comparisons to Easter eggs.

Dymszo said this model might be the most accurate re-creation of the original model in existence, even though Tate pointed out that there are some obvious differences in the overall shape of the two ships. The Museum of Science Fiction, set to open in Washington, D.C., has a 6-foot (1.8 m) model of Orion III that might be shaped more accurately, but it is also 2 feet (0.6 m) longer than the actual movie model. The museum's version is also painted entirely in shades of grey, instead of the colorful patchwork of colors that Dymszo used.

"I've been making models and miniatures since I was actually very young," Dymszo told Space.com. "And most people sort of grow out of [model making] when they're ten, twelve years old, and they move on to other things. I never stopped. Literally. So I've built thousands and thousands of models."

"But back in the 90's I realized you could actually make money building models," he said. "So I started doing it professionally and it's been going on ever since. We've done work for Sony studios; I made 45 weapons for the movie 'Blade II'; helped MGM with a [James] Bond commercial one time. So I've been doing all kinds of crazy projects like that since about 1995."

Unless you're lucky enough to have Dymszo as a friend, you probably won't be able to get your hands on one of these anytime soon (although you might be able to find one of these Orion III models made by Aurora). In fact, licensed merchandise from "2001" was very limited until recently. In 2014, Taschen books released a four-volume book that, according to the company's website, is "the most exhaustive publication ever devoted" to the film. There is also a single-volume version of the book. Then, earlier this year, Go Hero began selling two extremely detailed licensed collector figures from the movie: astronauts Dave Bowman and Frank Poole. Perhaps fans of this space-movie epic will start to see licensed merchandise become available.

Editor's Note: The Orion spaceplane did not travel directly to the moon, as this article previously stated.