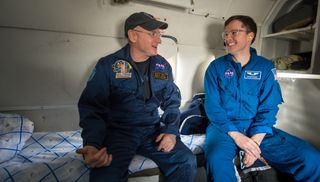 NASA astronaut Scott Kelly has mixed emotions about being back on Earth after nearly a year in space.

Kelly and cosmonaut Mikhail Kornienko touched down on the steppe of Kazakhstan late Tuesday (March 1), wrapping up their unprecedented 340-day stay aboard the International Space Station. (Cosmonaut Sergey Volkov came home with them, but his space station mission had been the typical 5.5-month stint.) In a newly released NASA postlanding video, Kelly said he's glad to be home — but his feelings are more complicated than that.

"Leaving the space station was bittersweet," Kelly said. "I'd been there a long time, so I looked forward to leaving. But at the same time, it's a magnificent place, and I'm going to miss it. So, mixed emotions, I guess."

The main goal of the 340-day mission is to help lay the foundation for crewed journeys to Mars. Researchers are studying how Kelly and Kornienko coped psychologically and physiologically with their extended stay in space, gathering information that could help keep astronauts safer and healthier during the long trip to the Red Planet.

The early returns in this regard are promising, at least based on how Kelly feels.

"I'm definitely encouraged on our ability to go even longer," Kelly said. "Even though I looked forward to coming home, and there's things that I miss, I felt like, if it was for the right reason, I clearly could've stayed however long it took."

While the spaceflight aspect of the one-year mission is now over, the research side will continue for quite some time. Scientists and doctors will continue to monitor Kelly and Kornienko, and analyze blood samples and other data collected on the space station, for months to come.

Part of this analysis involves Scott Kelly's identical twin brother Mark, a former NASA astronaut who stayed on the ground and will allow genetic comparisons to be made. (Scientists will examine both brothers to see if long-duration spaceflight induced any genetic changes in Scott.)

The one-year crewmates have now gone their separate ways. Shortly after touching down, Kornienko and Volkov headed for Moscow, while Kelly started the long trip back to the United States. Kelly is scheduled to arrive in Houston, where NASA's Johnson Space Center is located, late tonight (March 2), space agency officials said.