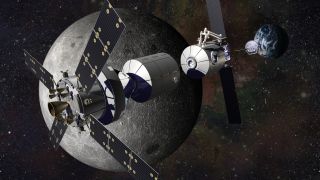 An approach to cislunar habitats is one that is both modular and flexible, adding elements over time. NASA's Orion spacecraft is capable of transporting habitat elements to an orbiting outpost around the moon.
(Image: © Lockheed Martin)

GOLDEN, Colo. — Researchers are mapping out how to build a human outpost in cislunar space — the region around Earth's moon.

The ongoing work is expected to help plot out other deep-space trips, such as the journey to a near-Earth asteroid and the larger leap to distant Mars.

Under NASA's Next Space Technologies for Exploration Partnerships (NextSTEP) Projects, scientists and engineers are examining how best to utilize NASA's Orion deep-space crew capsule and future human habitats to set up a cislunar outpost. [Visions of Deep-Space Stations (Gallery)]

Engineering looks are in progress to outline life-support needs, astronaut radiation protection and communication systems that work best for operations in cislunar space.

Under a NextSTEP award, Lockheed Martin's space systems division is studying the augmentation of Orion to initially sustain a crew of four for up to 60 days in cislunar space. Researchers are also looking at the possibility of scaling up this concept to provide in-space habitation for future crewed Mars missions.

In March 2015, the aerospace company's entry was one of seven NextSTEP habitat projects picked by NASA.

"As the primary contractor for Orion, we know that system very well and understand the requirements for going into deep space," Pratt told Space.com.

The intent of the work is to put in place a crew-tended, cislunar habitat that can support astronauts for stretches of 30 days or longer, then become dormant for a period of time before being revisited, said Josh Hopkins, Lockheed Martin's space exploration architect.

Operate on its own

Analyses show that distant retrograde orbits that would be used by a cislunar outpost are stable for thousands and thousands of years, Hopkins told Space.com.

"If you put a station there, you don't have to do orbit change maneuvers like you do the International Space Station," he said.

Pratt added that the cislunar outpost would have to operate on its own with a fair amount of autonomy. That also would mean a reduced amount of ground support, he said, in order to make the outpost more affordable.

The cislunar outpost is envisioned as a place from which to operate robots on the moon, Pratt said. The crewed outpost could perhaps even serve as a receiving node for lunar samples on their way to Earth, and as a life-sciences test bed as well, he added.

The cislunar outpost would be outside Earth's protective magnetic field, so planners are focused on ways to limit crewmembers' radiation exposure.

Other issues to deal with involve "developing techniques and operations, how to bring up spare parts for the outpost [and] how to deal with emergencies," Pratt said.

"We don't have to duplicate those systems on the habitat. We're trying to keep costs down and keep it as simple and affordable as we can," Hopkins said. "It doesn't have to be as complex and expensive as the International Space Station."

Establishment of a cislunar habitat would likely occur via a phased approach, he added.

"We're looking at getting something up and operating in cislunar space relatively soon … but also be able to bring additional generations of technology up after first launch," Hopkins said.

Such hardware could include more advanced recycling life-support gear that could be tested out there, he said. Such work could serve as a trial run for this vital equipment prior to use on crewed Mars missions.

"NASA is interested in a habitat that's both modular and evolvable … taking a more phased approach that's affordable, and you learn as you go," Pratt said. "Each module contains more complex systems and has more capability. That gets you closer to a Mars-class system that you'll need for a Mars transit vehicle."

Working out systems and strategies near the moon is an important step, Hopkins said. The moon is almost exactly 1,000 times farther away from Earth's surface than the space station is. And a Mars mission would take astronauts about 1,000 times farther away than the moon, he said, adding that incremental steps beyond cislunar would also likely be needed before humans could be dispatched to the Red Planet.

"Something that is important for NASA and for our team is to get that toehold in cislunar space," Pratt said.

Leonard David has been reporting on the space industry for more than five decades. He is former director of research for the National Commission on Space and is co-author of Buzz Aldrin's 2013 book "Mission to Mars – My Vision for Space Exploration," published by National Geographic with a new updated paperback version released in May 2015.Follow us @Spacedotcom, Facebook or Google+. Originally published on Space.com.