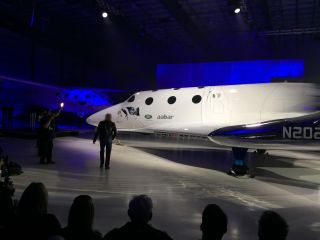 MOJAVE, California — Virgin Galactic's new spaceship has the enthusiastic endorsement of one of the world's greatest scientists, who plans to fly on the vehicle one day.

Unlike actor Harrison Ford and English soprano Sarah Brightman, Hawking did not attend the event. But Virgin Galactic played a four-minute-long recorded message from the physicist when it was time to announce Unity's name. [Gallery: Virgin Galactic's VSS Unity Rolls Out]

"We are entering a new space age, and I hope this will help to create a new unity. Space exploration has already been a great unifier — we seem able to cooperate between nations in space in a way we can only envy on Earth," Hawking said in the message.

"Taking more and more passengers out into space will enable them and us to look both outwards and back, but with a fresh perspective in both directions," he added. "It will help bring new meaning to our place on Earth and to our responsibilities as its stewards, and it will help us to recognize our place and our future in the cosmos — which is where I believe our ultimate destiny lies."

Stephen Hawking has suffered from the neurodegenerative disease ALS (amyotrophic lateral sclerosis), which is also known as Lou Gehrig's disease, for more than 50 years. He is confined to a wheelchair and speaks with the aid of a computer.

Hawking said in his recorded message that he has always dreamed of flying to space, but for most of his life he viewed that dream as unachievable. After hearing Hawking speak of his dream during a radio interview about eight years ago, however, Virgin Galactic founder Richard Branson called the scientist up and offered him a free seat on SpaceShipTwo.

"I said 'yes' immediately," Hawking said in his recorded message. "Since that day, I have never changed my mind. If I am able to go — and if Richard will still take me — I would be very proud to fly on this spaceship."

Branson has repeatedly expressed his admiration for Hawking, who was invited to Friday's event but apparently couldn't make it because of health issues. The scientist is the only person ever to be offered a free ride on SpaceShipTwo, Branson has said. And the entrepreneur revealed Friday that a piece of Hawking graces VSS Unity's exterior.

"We felt strongly that we should somehow make sure that Stephen remained a permanent part of Unity's story, because so much of what he stands for resonates with what we at Virgin Galactic aspire to be," Branson said during the unveiling ceremony. "So the Galactic Girl on the side of our proud Spaceship Unity now carries a banner using an image of Stephen's eye."

The face of Unity's Galactic Girl is based on an old photo of Branson's mother, Eve, the entrepreneur added.

SpaceShipTwo is designed to carry six passengers on brief journeys to suborbital space, for $250,000 per seat. Customers will get to see the curvature of the Earth against the blackness of space and experience a few minutes of weightlessness during the trip, Virgin Galactic representatives say.

Unity will be subjected to a variety of ground-based tests before beginning its flight trials. It's unclear exactly when the new spaceship will be ready to start carrying passengers to suborbital space and back.