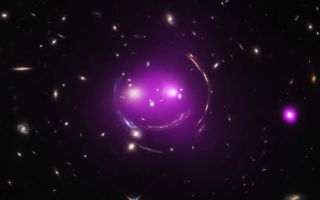 This cosmic grinning emoji consists of multiple galaxies in the background with the galaxies in the foreground creating a lensing effect.
(Image: © X-Ray: NASA/CXC/University of Bonn/ G. Schellenberger et al.; Optical: Int)

A century ago Albert Einstein predicted the phenomenon of gravitational lensing using his general theory of relativity. Today we have an example of the effect when we look at the Cheshire Cat galaxy group with the foreground galaxies lensing the background galaxies into the arcs "framing" the smiling face. The eyes of the face are created by members of the foreground grouping which are merging, displaying a bright purple hue in the X-ray glow. The image was created with data from the Chandra and Hubble space telescopes. [Read more about gravitational lensing.]