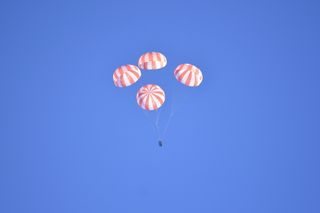 SpaceX successfully tested parachutes that will be used on its Dragon spacecraft to bring human passengers back to Earth.
(Image: © SpaceX)

SpaceX's Dragon is on track. A recent video shows a smooth parachute test for the SpaceX space capsule that will one day ferry astronauts to and from the International Space Station.

In the latest Dragon parachute test video, four red-and-white chutes helped a simulated spacecraft descend to the desert near Coolidge, Arizona, after the system was released from a C-130 cargo aircraft. A Dragon spacecraft was not actually involved in the test. Instead, SpaceX used a mass simulator connected to the parachute system. [SpaceX's Dragon Crew Capsule in Pictures]

Dragon has already been used to haul cargo to and from the International Space Station, but SpaceX is now working on a new system to carry up humans starting around 2018. The company is performing final development and certification work for NASA's Commercial Crew Program.

"SpaceX continues to perform tests of flight-like hardware that allows engineers to assess the reliability," NASA officials said in a statement. "Later tests will grow progressively more realistic to simulate as much of the actual conditions and processes the system will see during an operational mission."

The first versions of the spacecraft will splash down in ocean, but SpaceX plans to eventually land the spacecraft on land by firing eight SuperDraco engines. SpaceX tested this hover-power ability in Texas in November.

SpaceX and Boeing are working on separate agreements with NASA to bring astronauts to low-Earth orbit destinations. Separately, NASA is also working on developing an Orion spacecraft for missions to the moon, asteroids or other locations deeper in space.