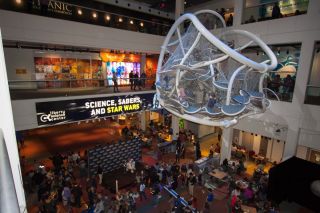 "Star Wars" remixes and tribute songs filled the air as crowds of dressed-up fans and their parents (and children) packed into the learning center in New Jersey Friday to kick off "Science, Sabers and Star Wars," a celebration of the movies' world.

The event runs from Friday (Feb.12) through Monday (Feb.15), and visitors who dress up get $5 off the price of admission. Once there, they can train to be a Jedi, design a droid, blast rockets at the Death Star, meet R2-D2, and even see arcs of electricity pulsate to the beat in a "Star Wars"-themed Tesla Coil show — all activities aimed at teaching a bit of science with the movies' help. ['Star Wars and the Power of Costume' Exhibition: Gallery]

"We're able to marry something people like anyway — and, of course, that's their enthusiasm for 'Star Wars' — with actually going a bit into the science behind it," Paul Hoffman, Liberty Science Center president and CEO, told Space.com. "We need[ed] activities that have science in them, we need ones that we can move lots of people through, we need ones that will be interesting for the spectators even though they're not doing it — it's fun to see people try to shoot down the Death Star, or fly a drone."

Most of the activities are clustered together on the center's second floor, with crowds packing in  to fly a mini Millennium Falcon, build a lightsaber, construct Death-Star-bound rockets, learn about holograms and plasma and even show off a Wookie call in a contest. Visitors practice impromptu saber fights in the back, and stormtroopers, Jedi knights and Mandalorian warriors weave in and out, posing for photos. (A life-size R2-D2 also offers a more stationary photo opportunity.)

"It's good seeing adults smile, […] reliving their childhood," one of the Mandalorians told Space.com. He's a part of the Mandalorian Mercs — a group who wears homemade costumes to events to raise funds for children's charities. Stormtroopers from the 501st Legion and Jedi from Empire Saber Guild — similar charity organizations — join the Mercs on the floor.

"The younger children, they just light up — when they're not running away," he added.

There's one other activity attendees can pursue, although it's not in the program. In 2007, a staff member hid a secret "Star Wars" "Easter egg" somewhere in the science center. Now, a series of clues will lead inquisitive guests to the little-known interactive feature, hidden right inside one of the exhibits. Anyone who locates the Easter egg will be "experientially richly rewarded," Hoffman said. (At the time of this writing, Space.com had not located the Easter egg, but we're going to try again later.)

Hoffman estimated at least 10,000 people will make their way through the exhibits and special "Star Wars" activities over the course of the weekend.  "That's what's fun about it," he said. "It really is a party, and to be able to celebrate with people that have the same enthusiasms you do, in this case 'Star Wars,' is a pretty fun thing."