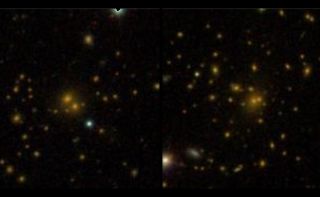 Galaxy clusters come in two flavors: The image on the left shows a spread-out collection of galaxies, while the one on the right shows a more densely packed group.
(Image: © Sloan Digital Sky Survey)

Galaxy clusters, containing thousands of individual galaxies, are some of the largest celestial objects in the heavens. In a new study, scientists show that the relationship between galaxy clusters and dark matter — the mysterious stuff that accounts for 80% of the mass in the universe — is more complex than previously thought.

Dark matter exerts a gravitational force that prevents galaxies in these clusters from flying off into space, holding the clusters together. As a result, scientists can use galaxy clusters to study the otherwise invisible dark matter in the universe.

"Galaxy clusters are like the large cities of our universe," study author Hironao Miyatake, at NASA's Jet Propulsion Laboratory in California, said in a statement from the agency. "In the same way that you can look at the lights of a city at night from a plane and infer its [the city's] size, these clusters give us a sense of the distribution of the dark matter that we can't see," he said. [65 All-Time Greatest Galaxy Images]

The first second of the universe

In the first trillionth of a second after the Big Bang, the universe experienced a period of rapid inflation. During that time, small energy fluctuations caused matter to be distributed unevenly. This uneven distribution can still be seen in the universe today, including in the nonuniform structure and distribution of galaxy clusters.In the new study, Miyatake and his team studied approximately 9,000 galaxy clusters from the Sloan Digital Sky Survey DR8 galaxy catalog, dividing them into two groups based on their internal structures. In the first group of clusters, the individual galaxies tended to cluster toward the center. In the second group, the galaxies were more spread out.

By using gravitational lensing (a phenomenon in which the gravity of a massive object bends light), the team established that clusters in both groups had comparable masses. That meant that, in theory, each type of cluster should have about the same amount of dark matter present in its environment.

"Our results indicate that the connection between a galaxy cluster and surrounding dark matter is not characterized [just] by cluster mass, but also its formation history," Miyatake said in the statement from NASA. "The connection between the internal structure of galaxy clusters and the distribution of surrounding dark matter is a consequence of the nature of the initial density fluctuations established before the universe was even 1second old."

Although dark matter makes up more than three-fourths of the matter in the universe, the mysterious substance remains a challenge to directly observe. Scientists must rely on indirect observations of how other objects are affected by dark matter's gravity in order to study it.

Galaxy clusters prove important for the study of dark matter because they reside in a region of space where the dark matter is far more dense than average. Additionally, because dark matter can be observed only by its gravitational effect, its presence is more apparent on large size scales. In the past, scientists have characterized the connection between the mass of galaxy clusters and their surrounding dark-matter environments. Other factors were predicted to influence the connection, but until the new study, those factors eluded detection in the universe.

"Cosmologists have long held to a very simple theory: The properties of a cluster are determined solely by its mass. These results show that the situation is much more complex. The cluster's environment also plays an important role," co-author David Spergel, professor of astronomy at Princeton University in New Jersey, said in a statement from the Kavli Institute for the Physics and Mathematics of the Universe in Japan, where some of the study's co-authors are located.

"Astronomers have been trying to detect evidence for this more complex picture for many years," Spergel said. "This is the first definitive detection."

The research was published online in the journal Physical Review Letters.