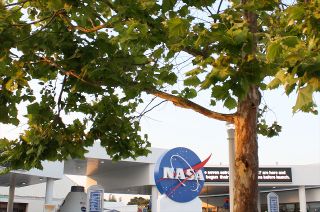 Moon Trees, like this one at NASA's Kennedy Space Center in Florida, stand as living monuments to the 1971 Apollo 14 mission.
(Image: © NASA)

They are spread across the United States, standing as living monuments to a moon mission 45 years ago this week.

The "Moon Trees" — redwoods, loblolly pines, sycamores, Douglas firs and sweetgums sprouted from seeds carried to the moon and back between Jan. 31 and Feb. 9, 1971 — are reminders of the Apollo 14 mission, even if some, if not many, of the trees' locations have now been lost to the passage of time.

Shepard, who 10 years prior had become the first United States astronaut to fly to space, was the first commander to wear red stripes on his spacesuit, an identifier still used by NASA today. Shepard was also the first to hit a golf ball off the moon, a record that is perhaps better remembered today, four and a half decades later, than Apollo 14's other, more official achievements.

While Shepard was packing the "little white pellets" for his "miles and miles" moon shot, Roosa chose to fly with him 500 tree seeds as a nod to his previous history as a smoke jumper for the U.S. Forest Service.

The five species of seeds, which were provided to Roosa by the Forest Service's genetics research staff, were more than just a memento of the flight.

"It was part science, part publicity stunt," Stan Krugman, a former Forest Service geneticist, told NASA in 2002. "The scientists wanted to find out what would happen to these seeds if they took a ride to the moon. Would they sprout? Would the trees look normal?"

Unfortunately, a mishap with the seeds after they returned to Earth made their fate even less certain: the canister that held the seeds for their flight to the moon was burst open during its decontamination, scattering its contents.

But the trees did grow, and by 1975, saplings were ready to leave Forest Service nurseries to be planted across the nation.

"We wanted to give them away as part of the bicentennial celebration in 1976," Krugman recalled.

The first of the Moon Trees, a sycamore, was planted with Roosa's help in Philadelphia's Washington Square Park on May 6, 1975. (The tree that grows there today is a clone of the original, which died in 2011.) [‪Apollo Landing Sites Spotted in Sharp New Detail (Video)]

Another of the arboreal monuments, a loblolly pine, went to the White House in Washington. At the time, President Gerald Ford described it as "a living symbol of our spectacular human and scientific achievements."

"May this young tree renew our deep-rooted faith in the ideals of our Founding Fathers," stated Ford, as relayed by telegram to the sites holding Moon Tree ceremonies. "May it inspire us to strive for the kind of growth that benefits our own citizens and all mankind."

"They look like ordinary trees — but they're special because they've been to the moon," said Williams in a 2002 NASA article. "I found one Moon Tree right here at Goddard near my office. I had no idea it was there."

Twenty years after beginning the search, Williams has now recorded the locations of more than 75 Moon Trees in 25 states. Trees were also planted in Brazil, Switzerland and presented to the Emperor of Japan.

Though clones and second-generation trees continue to be planted, finding the originals has taken on a new sense of urgency in recent years.

Some of the trees are long-lived species, but others have fallen victim to the effects of old age, severe weather and disease, according to NASA. Some two dozen of the trees have died, including the loblolly pine planted at the White House and a pine in New Orleans that was damaged by Hurricane Katrina in 2005 and later removed.

"I think when people are aware of the heritage of the trees, they usually take steps to preserve them," Williams said. "That's why we want to locate as many as we can soon. We want to have a record that these trees are — or were — a part of these communities, before they're gone."

Roosa died in 1994, but his children continue to make sure the legacy of his Moon Trees lives on.

"The trees are the only living thing to commemorate man's most impressive achievement," said Roosa's son, Jack, in 2015.

See the canister that held the Moon Tree seeds on Apollo 14's mission to the moon at collectSPACE.com.