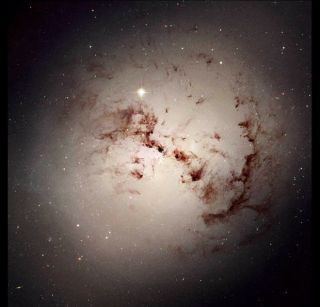 An elliptical galaxy, full of dark lanes of gas, likely formed in the merger of two other galaxies. Elliptical galaxies host less (or no) star birth than spiral galaxies like the Milky Way.
(Image: © NASA, ESA and The Hubble Heritage Team (STScI/AURA))

KISSIMMEE, Fla. — Many galaxies are LIERS, says Francesco Belfiore, a graduate student at the Kavli Institute for Cosmology at the University of Cambridge. He's not throwing shade at these objects, but rather trying to explain why new stars are no longer born inside them.

Earth lies in a galaxy that is flush with new star birth. The Milky Way's spiral shape and blue color are both signs that baby stars are being made inside it. But in elliptical-shaped galaxies with more reddish hues, star birth has stopped, and scientists don't understand why.

In trying to study the chemistry of these "dead" galaxies, researchers have found a different chemical fingerprint than the one that dominates star-forming galaxies. To describe what they were seeing, researchers came up with the acronym LINER, which stands for "low-ionization nuclear emission-line region." Belfiore's explanation of the name is more direct: "The reason why we use this acronym is because we don't know what they are," he said. [Gallery: 65 All-Time Great Galaxy Hits]

More specifically, scientists don't know what's creating the "LINER" chemical signature in the dead galaxies, and whether it might help explain why they stopped forming stars. Now, new observations by Belfiore and colleagues have added another twist to this LINER mystery: rather than coming from the black hole at the center of the dead galaxy, as researchers previously thought, the signature can be found throughout the galaxies, all the way out to their fringes.

According to Belfiore, this new finding that means the "N" in LINER (which stood for "nuclear," referring to the center of the galaxy) should be removed, and these galaxies should be called "LIERs." Belfiore spoke about the new findings on Jan. 8 during a press briefing here at the 227th meeting of the American Astronomical Society.

By itself, the new information doesn't answer the big question of why star formation has stopped in those galaxies, but it may resolve a seemingly contradictory observation found in many previous studies: that select patches of living galaxies also exhibit this LINER/LIER chemical fingerprint. In other words, it may help scientists understand what turns living galaxies into LIERs.

What does a galactic LIER look like? These "dead" galaxies are different from star-forming galaxies in many ways. They tend to be redder in color, because blue stars have shorter lives than red stars, so for the most part, the blue stars have all died out in the LIER galaxies. The stellar nurseries in star-forming galaxies like the Milky Way emit large amounts of light, and appear as bright, glowing beacons. These are also missing from images of LIER galaxies, which have a more diffuse glow.

Dead galaxies are also shaped differently. They're more often elliptical, like an American football, instead of a flat, circular spiral. Without star birth, these galaxies can't develop the massive arms that wrap around the centers of star-forming galaxies like the Milky Way. Once again, scientists don't fully understand why the stop of star birth also means a change in shape for the galaxy, but there is a theory that many elliptical galaxies are created when two or more galaxies collide and merge together. Perhaps that process somehow shuts off star birth, scientists have suggested.

A black hole to blame

These red, dead, football-shaped galaxies contain a cocktail of chemicals that's different from that of their living counterparts. Previous observations of elliptical galaxies have been limited in their resolution, and suggested that the LINER gas signature was coming from the center of these galaxies. This is important because, at the center of most (if not all) large galaxies is a supermassive black hole.

According to Belfiore, the leading theory for why dead galaxies have this LIER signature is because of activity near the black hole at the center of the galaxy. This idea is bolstered by a third category of galaxies called active galactic nuclei, or AGNs. The black holes at the center of AGNs are extremely active, meaning they have lots of material falling into them, producing jets of material that spew out into space, and radiating an incredible amount of light. AGNs also have a chemical signature that's different from that of LINER galaxies and star-forming galaxies, Belfiore noted in his talk. Some scientists suspect that LINER galaxies are simply weaker examples of AGNs, where a lower amount of activity around the black hole produces this unique chemical fingerprint, he said.

But the new observations presented by Belfiore have allowed scientists to look at the source of the LINER emission at a higher resolution, and revealed that they are not limited to the galaxy's center. Using the Sloan Digital Sky Survey (SDSS), a 2.5-meter (8.2 feet) telescope in New Mexico, as part of a project called MaNGA (Mapping Nearby Galaxies at Apache Point Observatory), Belfiore and colleagues found that, in some cases, LIER signatures can be found emanating from throughout a LINER galaxy, or from separate locations near the outskirts.

The new results indicate that the process creating the LINER signature is, most likely, something that can occur throughout the galaxy, Belfiore said. [Gallery: Black Holes of the Universe]

Living galaxies can be LIERS, too

Belfiore and his collaborators theorize that the LIER chemical fingerprint might be coming from older stars as they reach the twilight hours of their lives. In that stage of life, many stars shed their outer layers, and it may be the chemical signature of this dispelled stellar material that is being detected, Belfiore explained.

This would explain why the LIER chemical signature is seen in some galaxies where star formation is still happening, Belfiore told Space.com in an email.

Of course, dying stars are present even where new ones are forming, but the LIER emission is "always fainter than the emission due to star formation," Belfiore told Space.com in an email. Hence, in those living galaxies, the weak LIER emission would be swamped by photons from the star-forming regions and would go undetected by telescopes.

In other words, Belfiore said, it's possible that most galaxies are LIERs.

The idea that LINER galaxies may actually be LIERs — that this chemical signature is not coming from the galactic center but from another source, such as dying stars throughout the galaxy — has been building for some years, Belfiore told Space.com.

"Although most astronomers not directly working on this topic would assume that LINERs are weak active galactic nuclei, a paradigm shift has been happening slowly for several years now," he said. He mentioned that some astronomers remain highly skeptical of the idea, but the new SDSS observations may change that.

"Compared to previous studies, the new MaNGA data allows, for the first time, a direct test of the stellar hypothesis for LIER emission in a well-defined large sample of galaxies, covering (crucially) both spirals and ellipticals," Belfiore said. "It is the weight of this very direct evidence and its statistical significance that I feel is most compelling about the SDSS MaNGA result."

Belfiore said he and his colleagues are preparing to submit their results for publication.