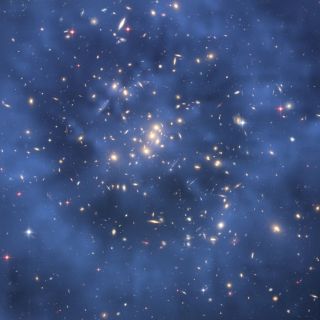 Astronomers and space scientists are flocking to Kissimmee, Florida, this week for the annual winter American Astronomical Society meeting, often called the "Super Bowl of Astronomy."

The enormous event, occurring at the Gaylord Palms Resort & Convention Center, will feature lectures and poster presentations on the latest research into planetary science, astronomy, astrophysics and other space topics, and Space.com reporters will be on site to bring you the latest developments and discussions.

"January's AAS [American Astronomical Society] meeting is often called the Super Bowl of Astronomy, and with more than 2,300 astronomers, educators, industry representatives and journalists in attendance and at least 1,600 oral and poster presentations scheduled, the 227th meeting will be eminently worthy of that moniker," AAS officials said in a press announcement.

Attendees will delve into some of the fields of study that have most puzzled and intrigued researchers over the past year: identifying and characterizing planets around other stars, interpreting the results of high-energy physics experiments, understanding the evolution of supermassive black holes, investigating the nature of dark matter, and much more. The researchers will also attend town hall meetings to discuss public policy and talk with representatives of national observatories and funding agencies like the National Science Foundation.

During a special lecture, New Horizons principal investigator Alan Stern will share the latest results from the probe's flyby of Pluto last July. Plus, AAS will host educational activities for 250 Kissimmee-area middle and high schoolers. The group will also hold a public "star party" on Thursday (Jan. 7), assuming good weather, where skywatchers will get a guided tour of the cosmos.

Last year's winter meeting was held in Seattle, and the summer meeting was combined with the International Astronomical Union's general assembly in Hawaii, in August.

Throughout the week, Space.com reporters, including Calla Cofield (@CallaCofield) and Sarah Lewin (@SarahExplains), will report on the news and discussion from the massive meeting.