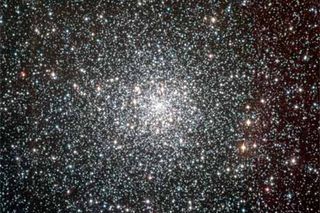 Paul Sutter is a visiting scholar at the Ohio State University's Center for Cosmology and AstroParticle Physics (CCAPP). Sutter is also host of the podcasts "Ask a Spaceman!" and "Realspace," and the YouTube series "Space in Your Face." Sutter contributed this article to Space.com's Expert Voices: Op-Ed & Insights.

How much light is in the universe? A lot. There, you can stop reading now.

No, wait, stay. You should read the rest of this, because it's pretty fun.

More than a thousand points of light

The first choice we have to make is how, exactly, to define "how much." A convenient way is to count light using photons. If you've ever wanted to know what a photon is, well, you're in luck: It's a bit of light. And "bit" here means "fundamental unit," or "quanta" if you want to be all fancy pants about it.

[How to Think About Photons (Video)]

Left alone, photons can also last forever, which will be important later on in this story.

So photons provide a handy way to measure the total amount of light in the universe: Count the photons, and you've counted the light. And we can count the photons because we know how much energy goes into each one (it's pretty much the definition), and we can easily add up all the energies for the sources of light. Yes, we could've just stuck with the energies themselves, but this is way more entertaining.

OK, maybe we should start with something familiar: a normal, everyday, harmless lightbulb. It may look innocent, but that pint-size beast is spewing out around 10^20 photons per second. Yes, every single second, 10^20 photons! Did I mention that a single photon isn't all that much light? No? Well, they're small.

If we added up all the known lightbulbs in the universe, we would have quite a bit of light. But let's not do that, because lightbulbs are easily outshone — ha, ha — by other sources of light, like the sun. The sun is basically a giant lightbulb. I mean, not really, but from a counting-the-photons perspective, you don't really care what's making the photons.

If you think a lightbulb is intense, well you're not very … ahem … bright, because the sun pumps out an easy 10^45 photons every second, of every day, of every year, over the course of a few billion years. That's a lot of photons.

Anyway, a few billion here, a few billion there, and pretty soon you're up in the 10^60 photons range. Give or take a few orders of magnitude, of course, but considering that photons are created and destroyed every single moment, it's not like we're ever going to get a perfect census anyway.

It's in the background, look closely

But there's plenty more light than starlight in the heavens. There are nebulae, and giant molecular clouds, and supernovae, and pulsars, and active galactic nuclei. Some of these are just absorbing and re-emitting photons — so they don't get added to the total — but certainly a lot of them are making new photons.

When these sources of light are near enough to Earth to be distinctly visible, they're called, well, "sources." But the universe has been around for a while , and is a lot bigger than Earth's own galaxy, and there's a lot going on in the background that scientists haven't 100-percent pinpointed yet. So there's a sort of extragalactic … background … light. "EBL?" Sure, if that’s what scientists want the jargon word to be, let’s go with that. That certainly contributes to the tab.

But really, I've just been messing with you this whole time. Stars, galaxies, supernovae, it's nothing. Not even a drop in the bucket. By far, and I mean by far, the brightest thing in the universe, the source of almost all the photons in the sky, is much older than anything I've listed. In fact, it's the oldest light there is: the cosmic microwave background.

"CMB?" Sure. It's "cosmic," because it comes from space. It's microwave radiation, and it's behind everything else. And yes, it's brighter than anything you've ever seen: This light floods every cubic centimeter of the cosmos, including the Earth! If you had microwave eyes, you would see it as a uniform haze of light coming from every direction in the sky.

It was born just 300,000 years into the history of the cosmos, when the universe finally cooled down enough to switch from a hot-and-messy plasma to a cool-and-collected neutral gas. In plasma mode, the photons wouldn't last long; as soon as they were born they would have rushed headlong into a nearby particle. In neutral gas mode, the photons were finally free to roam throughout the cosmos without interruption.

The radiation released at that time was at first as hot as its source: high-energy gamma-rays. But the universe is old and the universe is cold, and after all these eons, the expansion of the universe has stretched out that primordial light down into the microwave band, where it sits today.

[Watch: I explain the CMB in this video.]

The CMB didn't mess around. It created a whopping 10^90 photons. That single event, that transformational epoch, released more photons than every star that has ever burned in 13 billion years.

That's what you get when the entire universe is acting like a single lightbulb. Everything since the CMB event has been mere chump change. If you want to count all the light in the universe — and we do, since that's the point of this article — you can start and stop with the CMB.

Everything else in the universe is just a rounding error.

Learn more by listening to the episode "How Much Light Is in the Universe?" on the "Ask a Spaceman!" podcast, available on iTunes and on the Web at http://www.askaspaceman.com. Thanks to Tim Rattray for the question that led to this piece! Ask your own question on Twitter using #AskASpaceman or by following Paul @PaulMattSutter and facebook.com/PaulMattSutter.