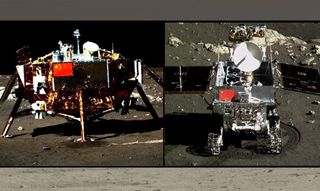 Data gleaned by China's Yutu rover on the moon has identified a new type of lunar rock, shedding insight on lunar volcanism.

As noted by the state-run Xinhua news agency, the new type of basaltic rock was discovered at a fresh crater named Zi Wei. The measurements were made by Yutu's Active Particle-induced X-ray Spectrometer (APXS) and its Visible and Near-infrared Imaging Spectrometer (VNIS).

Measurements of the rock composition indicate that the basalt contains a high enrichment of titanium dioxide and olivine. A team of scientists from China and the United States, led by Ling Zongcheng from China’s Shandong University, published the new findings in the journal Nature Communications. [China's Yutu Moon Rover Mission in Pictures]

On Dec.14, 2013, the Chang'e-3 lander soft-landed on the moon in the northeast of the Mare Imbrium. The lander then deployed the instrument-loaded Yutu rover.

While the rover suffered mechanical woes after wheeling about for some 375 feet (114 meters), it gathered images and scientific data about the moon. While presently unable to traverse the moon, Yutu reportedly continues to gather data, send and receive signals, and record images and video for its Chang'e-3 (CE-3) mission.

In part, the scientific paper in Nature explains: "From a correlated analysis of the regolith derived from rocks at the CE-3 landing site, freshly excavated by Zi Wei crater, we recognize a new type of lunar basalt with a distinctive mineral assemblage compared with the samples from Apollo and Luna, and the lunar meteorites. The chemical and mineralogical information of the CE-3 landing site provides new ground truth for some of the youngest volcanism on the moon."

To view the entire scientific paper – "Correlated compositional and mineralogical investigations at the Chang'e-3 landing site" – go to:
http://www.nature.com/ncomms/2015/151222/ncomms9880/full/ncomms9880.html#abstract

Leonard David has been reporting on the space industry for more than five decades. He is former director of research for the National Commission on Space and is co-author of Buzz Aldrin's 2013 book "Mission to Mars – My Vision for Space Exploration" published by National Geographic with an updated paperback version released in May 2015. Follow us @Spacedotcom, Facebook or Google+. Published on Space.com.