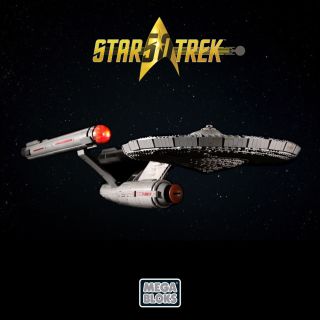 Mega Bloks is celebrating the 50th anniversary of "Star Trek" in 2016 with three new sets from the original series of the sci-fi franchise, including this flagship model of the USS Enterprise. All three sets will launch in the fall.
(Image: © Mega Bloks courtesy of Mega Brands)

"Star Trek" fans, assemble! Later this year, fans of the sci-fi franchise who also love construction will have the chance to build their own Klingon battle cruiser, transporter room and (of course) the famed USS Enterprise.

To commemorate the 50th anniversary of "Star Trek" this fall, Mega Bloks — a product produced by Mega Brands, a subsidiary of the Mattel toy company — will release several kits aimed at people who followed the exploits of James T. Kirk and other crews of the USS Enterprise.

Not surprisingly, the flagship of the new "Star Trek" sets is the 3,100-piece USS Enterprise NCC-1701 itself, which will retail for $249.99. It's a 1/350 scale model of the famous ship that took Kirk and his crew across much of the galaxy. [The Many Faces of the Starship Enterprise (Photos)]

The Transporter Room ($39.99) is inspired by the awesome "Star Trek: The Original Series" episode called "Mirror, Mirror." In that episode, a malfunction in the transporter replaces the crew with evil versions of themselves from a mirror universe. Kirk, Spock and Scotty are all included in the set, which has room for up to six figures.

"The iconic Transporter Room has cool features that include new glow-in-the dark wall panels that are also interchangeable to include the Mirror Universe logo to switch between the classic and parallel universe scenes," Mega Bloks wrote in a product description.

The Klingon D-7 Battle Cruiser ($29.99) is a symbol of a species that was once the enemy of the United Federation of Planets (in "The Original Series"), but joined the federation before the events of "The Next Generation" series. Helming the ship is the legendary Captain Kor, who appeared in multiple "Star Trek" series.

"A buildable villain ship for ultimate build and display," Mega Bloks wrote. "The set includes a swiveling display stand, nameplate featuring the name of the ship, a Klingon Empire red flag and one highly detailed, superposeable micro action figure of Kor, captain of the ship, with his authentic disruptor weapon."

Mega Bloks has released some intriguing space and sci-fi themed sets over the years, including tie-ins to the recent "Star Trek" re-boot films, "Halo" video game series, and even "Call of Duty's" zombie astronauts on the moon and the Odin military space station (our personal favorites, after "Star Trek," of course).