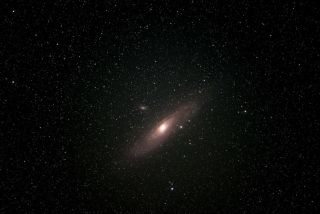 This spectacular image of the Andromeda Galaxy (M31) was captured by Greg Redfern, the "Sky Guy.”
(Image: © Greg Redfern)

In my opinion — and this of course is purely subjective — the most popular object that people like to view through a telescope is the moon.

Number two is probably the ringed planet Saturn. As far as third place is concerned, I would say it's a toss-up. Everyone enjoys looking at Jupiter, with its complex cloud belts, the famous Great Red Spot and four big satellites.

However, if it's autumn and the sky is reasonably dark and clear, with no bright moon to obscure the fainter stars, then another object makes its way into this conversation: The great Andromeda galaxy. [See amazing photos of the Andromeda galaxy]

The following question has floated out of the darkness many times at outdoor star parties I've attended: "Hey! Can you show us that galaxy?"

"That galaxy" always refers to Andromeda, which is also known as M31 in Charles Messier's famous catalogue of galaxies, nebulae and star clusters. Andromeda is the nearest major galaxy to our own Milky Way, as well as the largest and most massive galaxy in the so-called Local Group.

The spiral Andromeda galaxy can be a truly awe-inspiring night-sky sight. For example, in the second volume of his two-volume autobiography, "In Joy Still Felt" (Doubleday, 1980), the late biochemist and sci-fi author Isaac Asimov described when he and his wife Janet signed up for an astronomy-themed cruise:

"It was a beautiful mild night, and the sky was more splendid than a planetarium dome could have been. Janet used her binoculars to look at the objects described, and the high point came when we saw the Andromeda galaxy for the first time. If the cruise had ended at that point, we would have had our money's worth."

And yet, to the naked eye, Andromeda doesn't look like much — a wispy, hazy blotch that resembles a fuzzy star. But when you realize exactly what you're looking at, you can forgive the galaxy for being so dim and tired-looking.

The first definitive observation of Andromeda came more than 1,000 years ago. In the year 964 A.D., the Persian astronomer Abd al-Rahman al-Sūfī drew attention to a "little cloud" located among the stars of the constellation Andromeda, the Chained Princess.

Observations by NASA's Spitzer Space Telescope suggest that "little cloud" actually gives off the light of 1 trillion stars — five to 10 times more than our Milky Way possesses. And at its widest, Andromeda is about 220,000 light-years across. (The disk of the Milky Way is about 100,000 light-years wide.) [Photos: The Infrared Universe Seen by Spitzer]

These are indeed impressive figures, but the one factoid that is truly mind-blowing concerns Andromeda's distance — 2.5 million light-years.

The Andromeda galaxy is the farthest object that your eyes can see without the aid of binoculars or a telescope. If you view it tonight (and I'll show you how to find it in a moment), consider that the light from this wispy object traveled 2.5 million years to reach your eyes, traveling all that time at the tremendous velocity of 186,282 miles (299,792 kilometers) per second.

That light therefore began its journey around the time of the dawn of human consciousness, when mastodons and saber-toothed tigers roamed over much of pre-ice-age North America and prehistoric man struggled for existence in what is now the Olduvai Gorge of East Africa.

So, how can you spot this beautifuly galaxy? This upcoming week will be a good time to try, because the dazzlingly bright moon that dominated our evening sky this past week is now rising progressively later each evening.

So step outside between 7 and 9 p.m. local time, face south-southwest and look about three-quarters of the way up from the horizon to the point directly overhead. You'll take note of four bright stars; they form the Great Square of Pegasus, one of the landmarks of the sky.

Now imagine that the Square is the bowl of a large dipper, and look for its handle extending out from the star in the upper left corner of the Square. That star is Alpheratz. Three bright stars form this handle, including Alpheratz. These three — the other two are called Mirach and Almach — are almost evenly spaced and are about as far apart as the stars of the Square itself.

Incidentally, Alpheratz , Mirach and Almach belong to the constellation Andromeda.

Above the middle star of the handle (Mirach) are two fainter stars nearly in line with it. Near the northern star, if your sky is clear and dark, you can spy a hazy patch of light, almost directly overhead. (If you can't see it with your unaided eyes, use binoculars.) Focus on Mirach, then scan above it until you find that hazy patch.

And there it is — Andromeda!

The darker, the better

The galaxy can actually be a bit of a disappointment through binoculars or a good telescope. Andromeda often appears as little more than an elongated fuzzy patch, which gradually brightens in the center to a star-like nucleus.

Don't expect to see individual stars; only a long-exposure photograph will bring them out. Once, however, in August 1975, on an exceptionally clear and dark night at the annual Stellafane convention near Springfield, Vermont, I was able to glimpse the galaxy's dark dust lanes through a homemade 6-inch (15 centimeters) "rich field" telescope.

And in very dark skies, one can see the galaxy take on incredible dimensions. Careful binocular estimates by the French astronomer Robert Jonckheere in the 1950s gave a length of just over 5 degrees and a width of just over 1 degree. For comparison, the "pointer" stars at the end of the Big Dipper's bowl are separated by just over 5 degrees, and the full moon is only 0.5 degrees wide!

Admittedly, to make this measurement, Jonckheere did use "giant" binoculars with 2-inch (5 cm) lenses, with the oculars centered so that both of his pupils were fully used. He also had dark-adapted his eyes for 10 minutes with the exclusion of all light except from Andromeda itself.

The message is clear: The darker and more transparent the sky, the more impressive the view. Good luck!