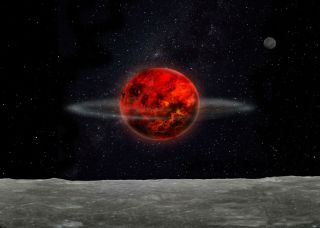 The mysterious tilt of the moon's orbit is due to gravitational tugs it received from giant, close-passing rocks that eventually slammed into the Earth, new research suggests.

The leading explanation for the moon's origin is that a Mars-size rock called Theia struck the newborn Earth about 4.5 billion years ago, and the moon coalesced from the disk of debris that resulted from this crash.

However, the moon's current orbit is tilted about 5 degrees with respect to Earth. Previous research suggested this inclination should be 10 times smaller — a long-standing mystery known as the lunar inclination problem. Now, new research shows that gravitational jostling of the newborn moon may solve this puzzle. This finding could also help to explain the levels of gold, platinum and other metals seen in Earth's outer layers, the authors of the new research added. [How the Moon Formed: An Illustrated Timeline (Gallery)]

The early solar system was full of giant rocks hurtling around it and later colliding with Earth and the other planets.

For the new research, scientists ran computer models of the newborn solar system, and began their simulations with the moon orbiting around the Earth's orbital plane. (Collisions between the rocks that came to make up the moon should have dissipated their energy and evened out the disk of debris around the Earth, causing the moon to orbit around Earth's orbital plane.) The simulations included rocks with a total mass equal to 0.75 to 1.5 percent of Earth's mass. (For comparison, the moon's mass is about 1.2 percent of Earth's mass.)

Before these giant rocks smacked into Earth, they each typically experienced thousands of close passes with the planet, a portion of which might have brought them close enough to Earth or the moon to strongly perturb the moon's orbit with their gravitational pull. The researchers found that there was a high chance that, a few tens of millions of years after lunar formation, these close passes could have given the moon's orbit the tilt seen today.

"The most surprising thing about these results is the ease with which the moon's orbital trajectory can be tilted, or excited, by gravitational interactions with passing objects," Kaveh Pahlevan, a planetary scientist at the Observatory of the Côte d'Azur in Nice, France, and lead author of the study, told Space.com.

These findings suggest that the giant impact that formed the moon occurred near the end of Earth's formation.

"If the moon-forming event had occurred earlier, when more massive bodies were around, the moon's orbit would have been much more excited and likely destabilized, with the moon colliding with the Earth or escaping to interplanetary space," Pahlevan said. "The relative lateness of the moon-forming event during Earth formation can be understood as a necessity for its survival. Earlier moons were simply lost."

These findings also support previous research suggesting that giant rocks delivered a "late veneer" of metals onto Earth, adding about the last 1 percent of the planet's mass. Gold, platinum, iridium and certain other metals are highly siderophile, meaning they have a strong chemical affinity for iron. Because the newborn Earth was largely molten, most of the planet's iron sunk to its core, and this iron should have taken most of Earth's highly siderophile elements with it. The fact that such metals are found in relatively high levels on Earth's surface suggests they were delivered by giant impacts from many massive rocks, after Earth's core finished forming.

"Had such a population of objects not existed, the moon might be orbiting in Earth's orbital plane, with total solar eclipses occurring as a spectacular monthly event," Robin Canup, a planetary scientist at the Southwest Research Institute, wrote in a commentary article about this research, published in the journal Nature. "But our jewelry would be much less impressive — made from tin and copper, rather than from platinum and gold."

The vulnerability of planet-moon systems to gravitational disruption from outside bodies might help to explain some mysterious features of the inner solar system, Pahlevan said. For instance, Venus likely experienced the same kind of giant impacts that created Earth's moon, but it has no moon, and —strangely — spins very little on its axis.

"Could these Venusian features be the outcome of a planet-satellite system that was destabilized by strong collisionless encounters?" Pahlevan said. "That is a topic for future research."

Pahlevan and senior co-author Alessandro Morbidelli, of the Observatory of the Côte d’Azur, detailed their findings in the Nov. 26 issue of the journal Nature.