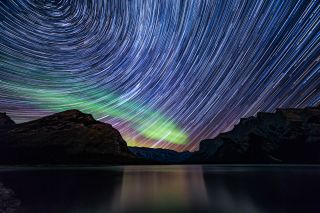 Starry trails and a green aurora shine in this stunning image taken by astrophotographer Deepanshu Arora at Lake Minnewanka in Banff National Park.

"While I was shooting images for this star trail, [the aurora borealis] started and it was very prominent in that darkness. It was a very beautiful sight," Arora wrote in an email to Space.com.

Long exposure times can create star trails in a night sky image. The stars appear as if they are leaving trails behind them as they trace a path across the night sky. The stars appear to move because of the rotation of the Earth. [Awesome Star-Trail Photos from Space]

Auroras are caused by charged particles from the sun (the solar wind) that interact with the Earth's upper atmosphere (at altitudes above 50 miles, or 80 kilometers).

The charged particles are drawn to Earth's polar regions by the planet's magnetic field, resulting in the aurora borealis, or northern lights, and its southern counterpart the aurora australis, or southern lights.

Editor's note: If you have an amazing night sky photo you'd like to share with Space.com and our news partners for a possible story or image gallery, send images and comments in to spacephotos@space.com.