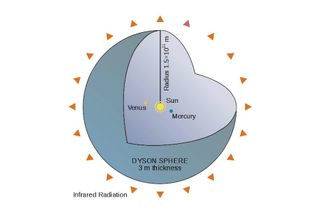 A diagram of a Dyson sphere as one might be constructed in our solar system.
(Image: © Bibi Saint-Pol (Wikimedia))

A star is dimming for reasons that astronomers can't explain.

Observations by NASA's Kepler space telescope revealed that the star KIC 8462852, which lies about 1,500 light-years from Earth, dimmed dramatically and strangely several times over the past few years. Researchers aren't sure what's going on, and they have posited that some sort of light-blocking "alien megastructure" is a possible — though unlikely — explanation.

Astronomers are following up on that possibility, using radio telescopes to hunt for signals coming from KIC 8462852. But these scientists are urging skepticism on the alien-life hypothesis — as are science-fiction writers. [13 Ways to Hunt Intelligent Alien Life]

"We are the most skeptical people on the planet," Robert J. Sawyer, a Canadian sci-fi writer who regularly discusses alien life in his novels, told Space.com. His 23rd novel, "Quantum Night," will be published in 2016. "It is hard to find a science-fiction writer who believes in UFOs or flying saucers," Sawyer said.

Sawyer added that journalists, by contrast, often pump up the news because they "smell front page." And while Sawyer supports the search for extraterrestrial intelligence (SETI) because it is so cheap to listen for radio signals, he said it's meaningful that, in five decades of searching, nothing has come up so far. Aliens, he said, may communicate by other means.

All that being said, what if KIC 8462852 does host an alien megastructure? What might it look like? Sawyer and fellow sci-fi novelist Larry Niven shared some ideas with Space.com.

Patterns in the sky

One possible use of a megastructure could be a sort of calling card, which was covered in Sawyer's 1994 novel "End of an Era." In that book, a paleontologist travels back to the time of the dinosaurs, some 65 million years ago, and spots a rosette pattern of stars in the sky. Upon analysis, it's clear the structure is far away; there is no parallax, or shifting in position when you view it at different times of the year (and at different points in Earth's orbit).

"You have to conclude that some now-extinct alien civilization was announcing itself to the universe by doing a mega-engineering project, moving the stars in a geodesic sphere so that from any vantage point, you would see it," Sawyer said.

Another use for a megastructure could be to harvest energy from a star, which is famously discussed in Niven's "Ringworld" series. Niven was inspired by the idea of a Dyson sphere — a shell or system of objects that would surround the star and collect its light.

In some cases, a Dyson sphere could be constructed as an artificial world with a water cycle, atmosphere and so on. Niven's twist, first articulated in the 1970 novel "Ringworld," was to have an object only around the star's equator — a ringworld — in part because spinning a Dyson sphere would force the atmosphere and oceans to the equator anyway. [Dyson Spheres: How Advanced Alien Civilizations Would Conquer the Galaxy (Infographic)]

"The Dyson sphere looked wonderful, but I decided to make a cheaper version," Niven told Space.com. "[The public] loved it. I was surprised, and before that, I was a little worried. I wasn't sure they'd take it seriously. Once I opened the field, there were enough new problems to make a [book]shelf all based on ring structures."

One problem with the ringworld is that it would eventually break apart due to gravity from the star — an issue that both Sawyer and Niven pointed out. In Niven's next book on that concept, "The Ringworld Engineers" (1979), he stabilized the ringworld using attitude jets on the rim, which were powered by the solar wind (a stream of particles coming from the sun). He also made the ringworld's floor — the side facing the sun — magnetic so that it would interact with the sun's magnetic field and keep the ringworld aligned with the equator.

Niven said he is also skeptical that the new find is an alien megastructure, but he said it could be suggestive of a Dyson cloud — a huge collection of solar panels to harvest the sun's energy. Stars could also be moved around to gather energy more efficiently — an idea that Gregory Benford and Niven cover in their jointly authored books "The Bowl of Heaven" (2012) and "Shipstar" (2014).

Aliens probably wouldn't use such a megastructure to act as a cosmic calling card, Niven added, as doing so would be very expensive.

However, Sawyer noted that there is historical precedent for making (or at least proposing to make) big structures that do little more than say hello. In the late 1800s, when some people believed there were canals and a dying civilization on Mars, Joseph Johann von Littrow (as the story goes) suggested digging huge canals in the Sahara, filling them with kerosene and setting them on fire.

"We would be signaling [the Martians] with glowing geometric shapes," Sawyer said. "It really has been this natural desire to say, 'Hey, we're here.'"