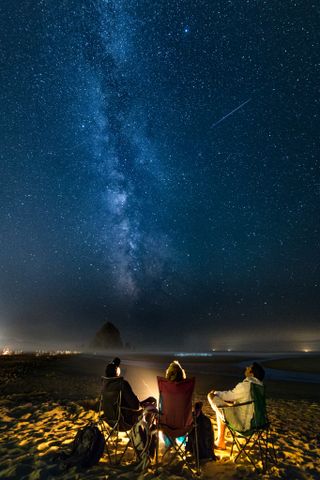 A trio of skywatchers enjoy the beach watching meteors streak across the starry sky.

Astrophotographer Deepanshu Arora took this image during Perseids Meteor shower week on August 18, 2015 at Cannon Beach in Oregon. Arora had just bought a wide lens camera and wanted to capture some shots of the night sky. He used a Samyang 14mm, f/2.8 for Canon EF mount.

"So I went to the coast in middle of the week to capture some pictures of the Milky Way. While I was there, I saw a few meteors falling down, so orchestrated this shot," Arora wrote in an email to Space.com. [See more amazing photos of the 2015 Perseid meteor shower]

The annual Perseid meteor shower occurs in late July or early August each year. Humans have observed the celestial events for more than 2,000 years. The meteors are thought to be debris from the comet Swift-Tuttle. The debris slams into the Earth’s atmosphere and burn up on entry creating the meteor shower.

To an amateur astrophotographer like Arora, the perfect image is about composition, hard work and long hours gazing into space.

"[It] took me about 10-12 attempts before I got everything sharp in that picture," he wrote. "Shooting stars didn't actually happen in this particular shot but the one before it, I just blended that in here because it matched well with the rest of the composition."

Editor's note: If you have an amazing skywatching photo you'd like to share with us and our news partners for a possible story or image gallery, send images and comments in to managing editor Tariq Malik at spacephotos@space.com.