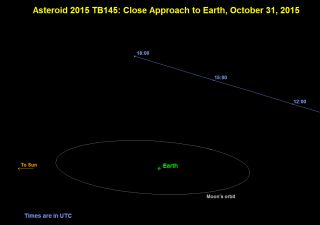 The big asteroid that will zoom past Earth on Halloween may actually be a comet, NASA researchers say.

Such work should reveal key details about the space rock's size, shape, surface features and other characteristics — including, perhaps, its true identity.

"The asteroid's orbit is very oblong with a high inclination to below the plane of the solar system," Lance Benner, of NASA's Jet Propulsion Laboratory in Pasadena, California, said in a statement.

"Such a unique orbit, along with its high encounter velocity — about 35 kilometers or 22 miles per second — raises the question of whether it may be some type of comet," added Benner, who leads NASA's asteroid radar research program. "If so, then this would be the first time that the Goldstone radar has imaged a comet from such a close distance."

Asteroid 2015 TB145 will be too faint to spot on Halloween with the naked eye, but anyone who's interested can get a look at the object online, thanks to live telescope views provided by the Slooh Community Observatory and the Virtual Telescope Project.

2015 TB145, which was just discovered on Oct. 10, completes one lap around the sun every three years or so. It's part of a near-Earth object (NEO) population thought to number in the millions.

Just 13,000 NEOs have been detected to date, meaning there are lots of potentially dangerous space rocks cruising through Earth's neighborhood unseen and unnamed. But there is some good news: Models suggest that about 95 percent of the biggest NEOs — the ones that could threaten human civilization if they hit Earth — have been discovered, and none of them pose a danger for the foreseeable future.