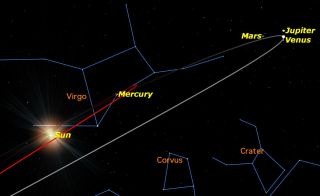 On Monday morning (Oct. 26), Venus will be at its greatest elongation from the sun, and will also appear close to Jupiter.
(Image: © Starry Night Software)

Venus has been dominating the morning sky for the past two months, and Monday (Oct. 26), it will form a vivid tableau with Jupiter and Mars as it reaches its farthest point from the sun.

The inner planets, Mercury and Venus, never stray far from the sun in Earth's sky. Mercury was at its greatest elongation west, 18 degrees from the sun, last Friday (Oct. 16), and is now moving back toward the sun. Venus is still moving away from the sun, but will pause and reverse directions on Oct. 26. Mars and Jupiter, with orbits outside that of Earth, both appear to be moving steadily westward relative to the sun. [October Skywatching: Eclipses, a Meteor Shower and More]

As a result, Venus and Jupiter will pass very close to each other — within 1.1 degrees — on Monday.

This close conjunction of Venus, Jupiter and Mars is best observed with the naked eye or binoculars. In a telescope, Venus will appear as a perfect miniature quarter moon, because at its greatest elongation, it is lit by the sun exactly from its left side. It appears 24 arc seconds in diameter, slightly smaller than Jupiter's 33 arc seconds but much larger than Mars' mere 4 arc seconds. A full moon, for contrast, is about 1,800 arc seconds wide.

Venus appears brightest because it is close to both the sun and the Earth. Jupiter is much larger in actual diameter — but it's far from the sun, so it's lit dimly. Mars — in between Venus and Jupiter in its distance from the sun, and small in size — is currently very far from Earth, so it appears even dimmer.

To put them into perspective, even though they're grouped closely together in our sky, the three planets vary greatly in distance from the Earth. Venus is closest, at 0.69 astronomical units (AU) on that particular day — 0.69 times the average distance between Earth and the sun. Mars is next, at 2.2 AU, and Jupiter is the farthest of the three, at 6.0 AU — nearly 10 times farther than Venus.

Many photographers have been taking advantage of the close approach of these three planets to capture them in the dawn sky, though the different brightnesses present a challenge in exposure. As always, we welcome your pictures of this beautiful event.

This article was provided to Space.com by Simulation Curriculum, the leader in space science curriculum solutions and the makers of Starry Night and SkySafari. Follow Starry Night on Twitter @StarryNightEdu. Follow us @Spacedotcom, Facebook and Google+. Original article on SPACE.com.