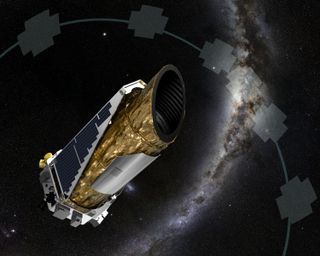 Mysterious dimmings from a faraway star spur speculation about "alien megastructures," rivers on ancient Mars were dozens of miles long and the New Horizons team publishes its first scientific paper about the epic July Pluto flyby. Here are Space.com's top stories of the week.

NASA's Kepler space telescope has detected something weird orbiting a nearby star. Is it evidence of an alien civilization, a clump of exocomets or something else? [Full Story: Has the Kepler Space Telescope Discovered an Alien Megastructure?]

Rivers on ancient Mars were dozens of miles long

The shape of pebbles photographed by NASA's Mars rover Curiosity suggests these rocks rolled along in Red Planet streams for dozens of miles billions of years ago. [Full Story: Pebbles on Mars Shaped by Ancient Long-Gone Rivers Dozens of Miles Long]

If you could hear the stuff that swirls around black holes, superdense white dwarfs and young stars, it would sound like the empty spaces on the radio dial. [Full Story: Eavesdropping on Black Holes: Feasting Giants Sound Like Static]

Amazing new maps of Jupiter by the Hubble Space Telescope reveal that the gas giant's Great Red Spot, a massive storm about twice the diameter of Earth, is slowing the speed at which it shrinks. [Full Story: Amazing Jupiter Video Shows Slowing Shrinkage of the Great Red Spot]

On Oct. 6, 1995, Michel Mayor and Didier Queloz of Switzerland's Geneva Observatory announced the discovery of the huge, scorching-hot 51 Pegasi b, the first alien planet ever found around a sunlike star. [Full Story: 20 Years On, Future Bright for Exoplanet Science]

Geoff Marcy, a leader in the field of exoplanet research, has resigned from his position as a professor of astronomy at the University of California, Berkeley, following an investigation that found he violated the school's sexual harassment policies. [Full Story: Planet Hunter Geoff Marcy Resigns Following Sexual Harassment Investigation]

'The Martian' gets space exploration right

The film adaptation of Andy Weir's breakout novel "The Martian" isn't just awesome, it might also be one of the most realistic space exploration movies that's ever graced the silver screen. [Full Story: 'The Martian' Might Be the Most Realistic Space Movie Ever Made]

Do aliens have sex?

Humans love to ponder whether alien life is out there, and what it might look like. So here's a burning question: Would extraterrestrials have sex? [Full Story: If Aliens Exist, Would They Have Sex?]