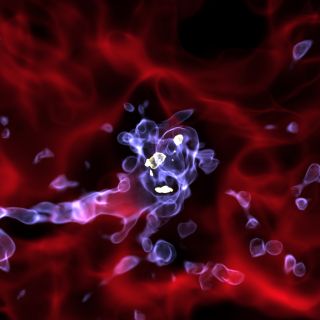 This image shows the gas density distribution of one instance in time of the model starburst galaxy, spanning approximately 650,000 light-years across. Extreme star formation in the central galaxy is fueled by significant gas inflows, rendering it extremely bright.
(Image: © Desika Narayanan)

The mystery of how the brightest galaxies in the universe form may soon be solved, as research now suggests they may be powered by prodigious flows of gas.

The most luminous galaxies in the universe, known as submillimeter galaxies, were first discovered more than a decade ago. Most of the vast amounts of light they emit gets absorbed by interstellar dust and re-emitted at far-infrared submillimeter wavelengths outside the visible range. As a result, they remained undiscovered until astronomers began combing the skies at these wavelengths.

"They have luminosities maybe hundreds to thousands of times that of the Milky Way," study lead author Desika Narayanan, an astrophysicist at Haverford College in Pennsylvania, told Space.com. [Great Images of Galaxies Across the Universe]

The extreme properties of these extraordinary galaxies have challenged existing models of galaxy formation, sparking vigorous debate among astronomers. Although computer simulations have been able to form sufficiently bright galaxies, the models could not match other features of these behemoths, such as their mass and star-formation rates.

There are two schools of thought as to how these galaxies may have formed. One suggests that collisions between pairs of gas-rich galaxies drove spectacular and relatively brief 100-million-year-long bursts of star formation. The other suggests these galaxies slowly accreted mass over the course of about 1 billion years. However, neither scenario could fully explain the known features of these galaxies.

Now researchers have presented new galaxy-formation simulations that for the first time are good matches for all the known properties of submillimeter galaxies, findings that were detailed online today (Sept. 23) in the journal Nature.

These new simulations achieved levels of realism that previous models lacked by using a "zoom" technique, said astrophysicist Romeel Davé at the University of the Western Cape in Cape Town, South Africa, who did not take part in this research. In this technique, the researchers both simulated galaxies and modeled patches of these galaxies at much higher resolutions.

This approach gave the researchers accurate looks at how these galaxies arose bit by bit, while also providing the big picture of how each galaxy interacted with its surroundings, Davé wrote in a commentary on this work in the same issue of Nature.

The new simulations suggest these galaxies sustained star-formation rates of about 500 to 1,000 suns per year for 1 billion years or so. This intense activity was a natural, long-lasting phase in the evolution of these massive galaxies.

Although supernova explosions from dying stars can propel gas outward from these galaxies and thus drive away the fuel needed for star formation, the scientists found these outflows had trouble escaping the intense gravitational pulls of these galaxies. Instead, the new simulations suggest, gas often rained back down on these galaxies and got recycled into new stars.

In the future, the researchers want to investigate other kinds of galaxies seen during cosmic noon, they said.

"Some have extremely massive black holes a billion times the mass of the sun, and some are very compact and relatively dead, not forming stars rapidly," Narayanan said. "It's interesting to see that the populations of these galaxies are similar to the submillimeter galaxy population, and it's tempting to say there's some connection between the three in some evolutionary sense.

"We want to see if there is a connection between these kinds of galaxies — does one turn into another?" Narayanan added. "If so, what physical processes drive that transformation? And in the grand scheme, how does that activity relate to what their descendants look like today, and how do we find these great-great-great-grandchildren in the local universe?"