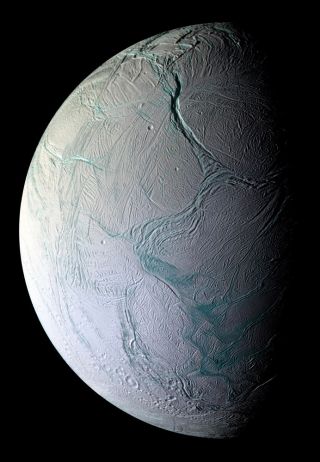 This image of the geyser-spewing Saturn moon Enceladus was taken on Oct. 5, 2008 by NASA’s Cassini spacecraft.
(Image: © NASA/JPL/Space Science Institute)

The Star Wars toys awaken, a looming 'supermoon' eclipse overshadows a solar eclipse, and hoverboard technology aims for the stars in Space.com's best stories for this week.

Total eclipse of the supermoon

Observers can watch the first total lunar eclipse of a 'supermoon' in over three decades on Sept. 27, when the full moon is at its closest to the Earth. There will also be a much less visible partial solar eclipse Sept. 13. [Full Story: Rare 'Supermoon' Total Lunar Eclipse Coming This Month]

Samples of the moon's soil collected by Apollo astronauts have crumbled since their collection 40 years ago: the particles scientists study have halved in size since the soil was fresh. [Full Story: Some Apollo Moon Samples 'Crumbling to Dust']

A Soyuz spacecraft dropped off three more crewmembers to the International Space Station Friday (Sept. 4), bringing the total up to 9 for the first time since 2013. Sept. 12, two of the newcomers and the current Commander will head back down. [Full Story: Crowded House! International Crew Arrives at Space Station]

Can life leap across the stars?

If life could spread from star to star, it would leave a distinct mathematical fingerprint — much like an epidemic, bubbles of life would scatter and grow. [Full Story: Life Might Spread Across Universe Like an 'Epidemic' in New Math Theory]

Midnight Friday (Sept. 4) a brand-new line of "Star Wars" toys was released to fans in New York's Times Square Toys 'R' Us. Hip-hop-dancing Stormtroopers built up to the big reveal (and many adorable rolling BB-8s were snatched up). [Full Story: The Force is Strong With These Toys: New 'Star Wars' Line is Here!]

NASA will join forces with the California company Arx Pax, whose magnetic hoverboard technology could maneuver tiny cube-sats in space without touching them. [Full Story: NASA Wants to Use Hoverboard Tech to Control Tiny Satellites]

SpaceX's Falcon 9 rocket will return to flight in a "couple of months," boasting beefier engines for increased thrust. The rocket has been grounded since a failed launch in June. [Full Story: SpaceX Will Debut Upgraded Flcon 9 Rocket on Return to Flight Mission]