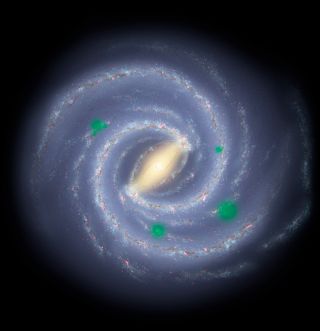 If life can spread from star to star, researchers should see a characteristic pattern of overlapping growth. In this theoretical artist's conception of the Milky Way galaxy, translucent green "bubbles" mark areas where life has spread beyond its home system to create cosmic oases, a process called panspermia.
(Image: © NASA/JPL/R. Hurt)

As astronomers get closer to finding potential signatures of life on faraway planets, a new mathematical description shows how to understand life's spread — and to determine if it's jumping from star to star.

If life arose on other planets, did it spontaneously grow from raw materials every time? Or did it dart from planet to planet and star to star, spreading across the universe? Telltale mathematical patterns of where life signatures appear could reveal the answer, authors of the new research said.

"Life could spread from host star to host star in a pattern similar to the outbreak of an epidemic," study co-author Avi Loeb of the Harvard-Smithsonian Center for Astrophysics (CfA) said in a statement. "In a sense, the Milky Way galaxy would become infected with pockets of life." [10 Alien Planets That May Support Life]

The concept of life spreading across different planets and stars is called panspermia — whether microscopic organisms hitch a ride on an asteroid or intelligent beings plot a course for new horizons. Mathematically, both of those situations would show the same basic pattern, the new research shows.

"In our theory, clusters of life form, grow and overlap like bubbles in a pot of boiling water," the study's lead author Henry Lin, also at CfA, said in the same statement. With that kind of growth, life would fill the universe much more quickly than if it arose only through spontaneous development.

As telescopes increase in power and researchers learn more about the substances and conditions, spotted from afar, that would herald extraterrestrial life, scientists get closer to potentially identifying such signs of life on other planets. And if life appears in distinct clusters that contain many different stars, it makes it much more likely that organisms can proliferate across the galaxy.

The tricky part is identifying those patterns while embedded inside them, only able to see a certain selection of stars. According to the new research, humans could get lucky and be on the edge of a bubble of life; if that were the case, astronomers would glimpse many instances of life on one side of Earth, and few to none on the other. It would be clear that life is spreading instead of growing spontaneously each time. But even if Earth was in a less favorable location, statistical analysis of the life-filled spots discovered could still reveal the characteristic pattern.

The transfer of life from star to star, through a species' exploration or by natural events in the galaxy, would drastically speed up the transition from an empty galaxy to a life-filled one, the researchers said in the paper. Then, it might be only a matter of time before humans ran up against something otherworldly.

The research was recently accepted for publication by The Astrophysical Journal Letters.