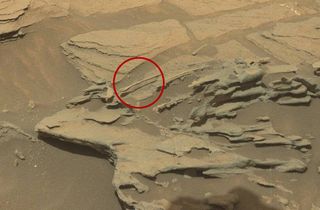 Is that really a floating spoon on Mars? No, but this photo from NASA's Mars rover Curiosity this week does show a weird rock that looks like a floating spoon. It was likely sculpted by Martian winds, NASA says.
(Image: © NASA/JPL-Caltech/MSSS )

A so-called "floating spoon" on Mars spotted by NASA's Curiosity rover is cooking up a storm on the Internet, but it's actually a cool rock formation sculpted over time by the Martian winds, officials with the space agency say.

The uncannily spoon-shaped rock was photographed by Curiosity on Sunday (Aug. 30) during the rover's 1,089th day on Mars, and word of the rock spread online in the days that followed. In the Curiosity photo, a handle shape juts out from an outcrop and ends in a rounded tip much like a spoon. It even casts its own spoon-shaped shadow on the ground below.

But alas, per NASA, the "spoon" is not some leftover debris from a Martian campsite or kitchen. Like other "sightings" on Mars, it's a strangely shaped rock. [Photos of the Face on Mars and Other Optical Illusions]

"There is no spoon. This weird Mars feature is likely a ventifact — a rock shaped by wind," NASA officials wrote in an image description.

We've included two views of the "spoon on Mars" here, one with the formation picked out and the other the raw image from Curiosity's Mastcam camera. Seeing shapes and patterns that aren't really there is known as pareidolia — and those mysterious shapes are merely optical illusions that trick the human eye and brain.

There's a long history of seeing strange shapes on the Red Planet, dating back to the eerie "Face on Mars" first spotted by NASA's Viking 1 orbiter. Since then, other shapes, including a rat, woman, jelly doughnut and — more recently — a crab, have been reported by eagle-eyed observers poring over NASA's photos. So far, they're all rocks, though. Every last one.

NASA's Curiosity rover landed on Mars in August 2012 and is now into its third year on Red Planet. The rover is currently studying a rock formation known as the Stimson unit inside the vast Gale Crater, according to a status update posted today (Sept. 2). Curiosity is expected to head for new location nearby, known as the Bridger Basin, on its way toward a spot called Bagnold Dunes.

"It's exciting to be driving again, and I’m sure we'll encounter some beautiful views as we continue to drive through this interesting terrain," Curiosity science team member Lauren Edgar, a research geologist with the USGS Astrogeology Science Center, wrote in the status update.