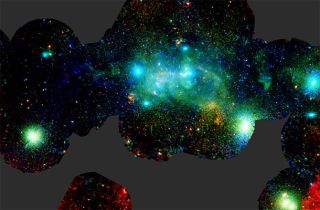 The image above depicts the center of the Milky Way galaxy as seen by XMM-Newton in x-rays.
(Image: © ESA/XMM-NEWTON/G. PONTI ET AL. 2015)

When a doctor uses an x-ray machine to look inside your body, dense structures like your bones are made visible. But when astronomers use the x-ray capabilities of ESA's XMM-Newton space observatory, structures inside the heart of our Milky Way galaxy are revealed — and not because they are blocking x-ray light but because they are shining brilliantly with it.

The image above shows what the crowded center of the galaxy looks like to XMM-Newton in X-rays, emitted en masse by extremely active and hot areas like the accretion disks that surround feeding black holes. [The X-ray Universe Revealed in Space Photos]

And right at the very heart of the Milky Way, 26,000 light-years from Earth, lies the galactic granddaddy of them all: Sagittarius A* (pronounced "A-star"), a supermassive black hole that contains more mass than 4.5 million suns.

As super and massive as it is, though, Sgr A* isn't anywhere near the biggest supermassive black hole out there (some contain tens of billions of solar masses) nor is it brightest object in this XMM-Newton image. This is because it, not unlike other active galactic nuclei, is relatively faint in x-rays. This may be because it's a sloppy eater, ejecting much of its accumulated material before it gets a chance to get close enough to its event horizon to accelerate, heat up, and start shining with x-rays.

What XMM-Newton has revealed though are "lobes" of x-ray-bright gas around the area of Sgr A*. These may be evidence of material that has either been ejected from the black hole or else being rapidly pushed away the powerful winds from it and other nearby stellar emissions.

A bright area, much brighter that Sgr A* in fact, can be seen to the lower right of the galactic center. This is the glow from what has now been confirmed to be a literal cluster of supernovas. Talk about hot stuff!