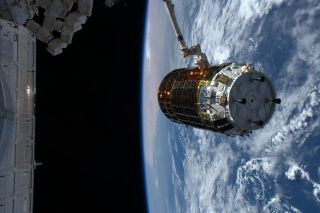 The Japanese cargo ship HTV-5 arrived at the International Space Station on Aug. 24, 2015. Astronaut Kimiya Yui of Japan posted this photo of the spacecraft after capturing it by robotic arm.
(Image: © Kimiya Yui / Japan Aerospace Exploration Agency via Twitter)

A robotic Japanese cargo ship made a special delivery to the International Space Station on Sunday (Aug. 24), ending a four-day trek to ferry tons of food, supplies — and even a mouse habitat and (experimental) liquor — to the orbiting lab.

The H-II Transfer Vehicle, called HTV-5, arrived at the space station at 6:55 a.m. EDT (1055 GMT), when it was captured via a robotic arm by astronauts inside the space station. The Japan Aerospace Exploration Agency (JAXA) launched the HTV-5 cargo ship on Wednesday (Aug. 19).

"HTV-5 capture was successful!" wrote space station astronaut Kimiya Yui of Japan, who piloted the robotic arm along with NASA astronaut Kjell Lindgren, on Twitter after grappling the spacecraft. "Thank you all for your support and hard work."  [Japan's HTV Spaceship Fleet in Pictures]

After Yui and Lindgren's capture of the HTV-5 spacecraft, flight controllers at NASA's Mission Control Center in Houston were expected to use the station's robotic arm to remotely park the cargo ship at an available docking port.

JAXA's HTV spacecraft are known in Japan as Kounotori, which is Japanese for "White Stork." The HTV-5 spacecraft is carrying about 9,500 lbs. (4,309 kilograms) of supplies and science gear for the space station crew.

Like its name suggests, HTV-5 is the fifth Japanese HTV spacecraft to ferry supplies to the space station. These spacecraft are cylindrical vehicles that measure 33 feet (10 meters) long and 13 feet (4 m) wide. HTV spacecraft are also disposable: Once the HTV-5 mission is complete, the vehicle will be detached from the station and travel to burn up in Earth's atmosphere.

The space station is currently home to six astronauts, representing the United States, Russia and Japan.

Editor's note: This story was updated on Aug. 25 to correct the fact that mouse habitats, and not actual mice, were launched to the International Space Station on HTV-5.