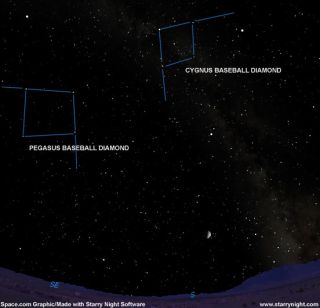 The baseball diamonds in the sky, as of Oct. 20 at 8 p.m. from mid-northern latitudes.

We're coming up on World Series time once again so it may be of interest to baseball fans that there are two star patterns that very much resemble two baseball diamonds in our current evening sky [map].

Some sky watchers might immediately think of the Great Square of Pegasus, landmark of the autumn sky, as one of these celestial ball fields, and they would be right [map].  This week at around 8:00 p.m., the Square is high in the eastern sky.  I know that many planetarium lecturers over the years have always referenced the Great Square as a baseball diamond (even though the "diamond" itself is in rather banged-up condition).

If your skies are reasonably dark, you'll be able to see two fourth magnitude stars - Tau and Upsilon Pegasi -- both inside of the Square, and roughly one-third the distance from Scheat to Algenib.  Perhaps we might imagine this stellar pair as the pitcher having a conference with his catcher just out in front of the mound.  Meanwhile, waiting behind home plate is the umpire, marked by the star Eta Pegasi.  Finally, another pair of stars - Lambda and Mu Pegasi - can be found just off of the third base line.  Perhaps we could imagine that here is the batter getting some instructions from the third base coach.

But a far better configuration for baseball can be found in stars that lie overhead and toward the west.  Astronomer Henry Neely (1879-1963), who worked at the Hayden Planetarium and who was known as the "Dean of New York Stargazers", invented this pattern nearly sixty years ago.

Study the stars of Cygnus, then check the map to find Neely's baseball game.

The batter (Deneb) is facing the pitcher (Sadr) and has hit a fly to center field.  Albireo is running in to get it and second baseman Phi is also out after it.  Shortstop Eta has run over to cover second for Phi.  Perhaps Deneb is a left-handed power hitter, since left fielder Vega plays normal depth, but Altair is quite deep in right-center.  Meanwhile Epsilon is at first base, while Delta patrols the "hot corner" at third.

Of course, if you ever point either of these celestial ball fields to members of your family or friends, you might want to substitute the star names for the names of the players on your own favorite baseball team.  You can even embellish the concept of this star pattern by doing a little play-by-play.

As an example, when describing the baseball game to his planetarium audiences, Neely would sometimes point to a close pair of stars near to Deneb (Omicron and 32 Cygni) commenting:

"Well, it looks like there's some controversy brewing ... I see the manager having an argument with the home plate umpire."

Neely would always finish his baseball discussion by sweeping his electric pointer around the sky with a flourish and noting," It must be an important game being played tonight ... why just look at all the people who showed up!"