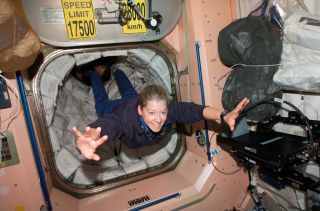 Astronaut Pam Melroy, commander of the space shuttle's STS-120 mission, floats into the Unity node of the International Space Station in 2007.
(Image: © NASA)

NEW YORK -- For Pamela Melroy, being one of the few women in NASA's astronaut program was a challenge, but not in the ways some might imagine.

"Every day, I found something I was terrible at and had to be good at," Melroy said late last month at the Fourth Space and Science Festival at the Intrepid Sea, Air & Space Museum in New York City, in an interview with television journalist Lynn Sherr.

Melroy talked about her years as an astronaut, test pilot and space shuttle commander. She is one of just two women — Eileen Collins is the other — to lead a shuttle mission. Melroy left NASA in 2009 and now works at the Defense Advanced Research Projects Agency. [‪NASA's Space Shuttle Program In Pictures: A Tribute]

Learning the skills to pilot the space shuttle, which stopped flying in 2011, was difficult at times, Melroy said, and in simulations she crashed the vehicle fairly often. Leadership skills, though, were just as important.

"I was responsible for the systems on the space shuttle operating properly," she said. "When I was commander, my system was the crew."

Crewmembers tended to treat each other with respect, Melroy added.

There was a strong incentive "to not treat women in an inappropriate way," she said. "The standard of behavior is very high because our lives depended on each other."

That doesn't mean she never ran into problems as a woman in a male-dominated field. When Melroy entered the military in the 1980s, women weren't allowed to fly combat aircraft. This rule struck Melroy — who flew missions in Panama and, later, in the first Gulf War — as absurd.

"I can fly in a plane in a combat situation, but I can't fly a plane that can shoot back?" she said.

Melroy later became a test pilot, and flew early versions of the Air Force's C-17 transport aircraft. She went the test-pilot route because she thought it was the best way to get into space.

"I got it in my head that I wanted to be an astronaut, and if I had to be a test pilot, then I would be," said Melroy, who ended up flying three space shuttle missions, from 2000 through 2007, during her NASA career.

The experience of liftoff is unique, she said. Uncomfortable as it is to be sitting on your back — the space shuttle launched vertically, pointing straight up — at that point the crew is eager to get underway. "They know the fastest way out of that seat is to go up."

"About two minutes before ignition, you put the visor down and you go on oxygen," she added. "You can't hear anything but your own voice." After that, the engines fire and one feels the intense G-forces. "It's like someone who weighs three times as much as you is sitting on your chest."

As the space shuttle rises, one can see out the window, and the cloud decks zoom by. "You know without a doubt you're going somewhere very, very fast," Melroy said. Once in orbit, the experience is exhilarating. "[Weightlessness] is like being transported to a magic universe."

Responding to an audience question, she said she was inspired to go to space by the Apollo 11 moon landing in 1969.

"I couldn't think of a more exciting thing to do with my life," Melroy said. And even though, at the time, many people still expected women to be "ladylike," her own family never put a limit on her aspirations.

Another audience member asked if NASA was still the way to go to be an astronaut. Melroy noted that the first crew that will fly aboard the private company SpaceX's manned Dragon capsule — in 2017, if all goes according to plan — consists of NASA astronauts. NASA, she added, will likely have the most highly trained people for some time to come.

Responding to a question about safety — specifically, whether NASA or the private sector would provide a safer space ride — Melroy compared the current age of space exploration to "the Wright Brothers" era of air travel. "There will be mishaps," she said, "and we'll learn from them."

A lot, of course, has changed since Melroy first entered the astronaut program, especially for women. Melroy recounted the story of a young girl who was reading the news of Sally Ride's 2012 death. (In 1983, Sally Ride became the first American woman to reach space.) Incredulous, the girl said, "There was a time when women couldn't be astronauts?"

Melroy is also optimistic about space exploration, even though the United States is currently dependent on Russia to get its astronauts into the final frontier.

"I think 20 years from now, I'll be sitting in the audience and asking one of you about your experience going to Mars," she said.