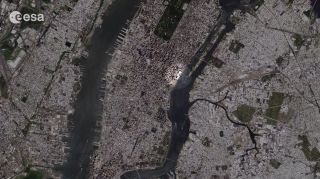 NEW YORK - This gorgeous satellite view of the busy Big Apple as seen from orbit offers a glimpse into the new "My Planet from Space" exhibit currently on view at the United Nations.

The video shows a satellite photo of New York City, pointing out the metropolis' boroughs before focusing in on the United Nations building, the home of the new exhibition. The image was captured by Japan's ALOS satellite in June 2010, with the European Space Agency unveiling it as part of its Earth from Space video series to spotlight the U.N.'s "My Planet from Space: Fragility and Beauty" exhibit.

In the NYC satellite video, narrator Kelsea Brennan-Wessels identifies the city's major attributes and also describes the process of land reclamation on the southwestern tip of Manhattan. The area was once part of the Hudson River before the city used rocks excavated from construction projects and sand to turn it into workable land (now Battery Park City),  Brennan-Wessels says. [Amazing Images of Earth from Space]

Similar man-made changes to Earth are reflected in the exhibit itself, which is free to visitors in the U.N. Headquarters Visitor's Lobby. In the exhibit, visitors see detailed satellite images from all over the world — remote glaciers and rainforests, urban sprawl and rising seas included.

"'My Planet from Space: Fragility and Beauty' is designed to address a wide audience, with particular focus on the younger generation," U.N. officials wrote in a project description. The exhibit, which opened July 9 and runs through Sept. 9, is produced by the European Space Agency in collaboration with the United Nations Office for Outer Space Affairs.

"It aims to increase awareness towards a more environmentally responsible lifestyle, promote the sustainable exploitation of natural resources and highlight the great potential of innovative space technology," U.N. officials said.