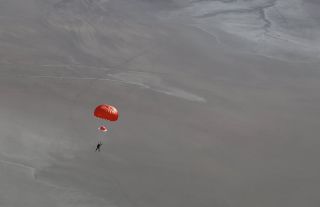 It is a picture of bravery in the face of the unthinkable. A newly released photo by Virgin Galactic that shows a test pilot managing to parachute to safety after the tragic SpaceShipTwo crash last year is a moving reminder of the risks and resilience that have helped humanity push its way out into space.

In the image, a seriously injured Siebold is suspended beneath a red parachute, which provides a splash of vivid color against the gray-brown desert. The photo was taken from above, apparently from an aircraft, by Virgin Galactic photographer Mark Greenberg.

"This photo shows pilot Pete Siebold as he parachutes safely down to Earth, with his arm up in the air to show everybody that he is alive and well," Virgin Galactic founder Sir Richard Branson wrote in a blog post Tuesday that featured the photo and addressed the NTSB investigation into the SpaceShipTwo crash. [SpaceShipTwo Crash Investigation in Photos]

At the time of the crash, Siebold was serving as Director of Flight Operations at Scaled Composites, the aerospace company that built SpaceShipTwo for Virgin Galactic. He and Alsbury were experienced, veteran test pilots for the company.

Siebold survived the SpaceShipTwo crash because his seat was ejected from the vehicle as the spacecraft broke apart. He was then able to unbuckle from the seat, allowing his parachute to deploy automatically, NTSB investigators have said.

On Tuesday, the NTSB presented the results of its nine-month investigation into the SpaceShipTwo crash, with investigators stressing that Scaled Composits and Virgin Galactic have already developed a mechanism that will prevent the craft's "feathering" tail boom re-entry system from unlocking early.

"As part of our constant and continuing efforts to enhance our processes, we have already made changes in the wake of the accident to further enhance safety. We will continue to look for additional ways to do so," Scaled representatives said in a statement Tuesday. "We extensively supported the NTSB's investigation and appreciate all of its work to make the industry safer. Mike Alsbury exemplified the passion that all our employees share. He and his family are always in our thoughts, and they are especially so today."

"Every new transformative technology requires risk, and we have seen the tragic and brave sacrifice of Mike and the recovery of injured surviving pilot Pete Siebold," Branson said in a video and in the blog post. "Their tremendous efforts are not in vain and will serve to strengthen our resolve to make big dreams come true."

SpaceShipTwo is designed to be carried to an altitude of about 50,000 feet (15,000 meters) by an aircraft called WhiteKnightTwo. The space plane is then dropped, and its onboard rocket engines kick on, blasting the vehicle up to suborbital space. Passengers who buy a ticket — the seat price is currently $250,000 — will experience a few minutes of weightlessness and be able to see Earth against the blackness of space before SpaceShipTwo glides home for a runway landing, Virgin Galactic representatives say.

That's the way things will work when SpaceShipTwo is up and running, anyway. The vehicle is still in the test phase; the Oct. 31 crash occurred during SpaceShipTwo's fourth rocket-powered test flight and 55th test flight overall.