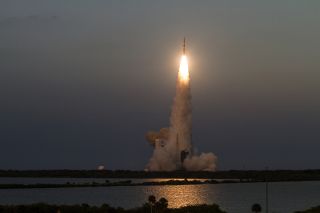 Today's launch marked the first use of the new RS-68A main engine in the Delta IV launch vehicle, according to Spaceflight Now. The engine upgrade is a step toward standardizing the engines for all Delta IV vehicle configurations, Spaceflight Now reported.

The launch from Space Launch Complex-37 was originally scheduled for Wednesday (July 22) but was canceled due to the weather. The launch vehicle was a Delta IV Medium-Plus rocket in a 5-4 configuration, which means the main rocket body as a five-meter (16.4 feet) payload fairing and four strap-on rocket motors.

Built by Boeing, the WGS satellites are "the Department of Defense's highest-capacity communication satellites," according to a fact sheet published by the Los Angeles Air Force Base. Three more WGS satellites are scheduled to launch by 2018, completing a 10-satellite constellation, Robert Tarleton, military satellite communication director at the Space and Missions System Center (SMC), said in a teleconference July 17.