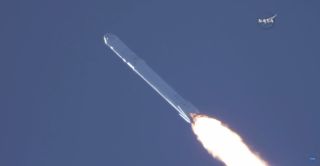 SpaceX's Falcon 9 rocket streaking through the sky with the company's Dragon cargo capsule on June 28, 2015. The rocket broke apart less than 3 minutes into the flight.
(Image: © NASA TV)

The failure of SpaceX's Falcon 9 rocket during an unmanned cargo launch toward the International Space Station late last month is a big setback for the company, founder and CEO Elon Musk said.

The Falcon 9 exploded less than 3 minutes after blasting off from Florida's Cape Canaveral Air Force Station on June 28, scuttling SpaceX's seventh contracted resupply flight to the orbiting lab for NASA. The consequences of the mishap probably will be substantial for the company, Musk said.

"Obviously, it's a huge blow to SpaceX," Musk said Tuesday (July 7) at the International Space Station Research and Development Conference in Boston. "We take these missions incredibly seriously."

SpaceX holds a $1.6 billion NASA deal to fly at least 12 robotic resupply runs to the orbiting lab using the two-stage Falcon 9 rocket and the company's Dragon capsule. All of the first six missions were completely successful.

The company is still investigating what happened on June 28. While the problem was apparently associated with an "overpressure event" in the rocket's upper-stage liquid-oxygen tank, investigators still hadn't pinpointed the root cause of the accident as of Tuesday.

"There's still no clear theory that fits with all the data," Musk said, adding that he expects to have something more definitive to say in the coming days.

The Falcon 9 will be grounded until the problem has been identified and rectified, and time is money in spaceflight as in other endeavors. SpaceX's launch manifest currently lists nearly three dozen future Falcon 9 flights, which will loft payloads for a variety of customers, so the impact of a lengthy delay could be far-reaching.

But Musk expressed optimism that the Falcon 9 will be up and running relatively soon.

The June 28 flight was scheduled to include a rocket-reusability test, in which the Falcon 9's first stage attempts to come down for a soft landing on a robotic ship in the Atlantic Ocean. SpaceX tried this bold maneuver on the previous two Dragon cargo launches, in January and April, and nearly pulled it off both times: The booster hit the boat but toppled over and crashed.

"I do think, in the future launches, that we've got a decent chance of landing on the ship," Musk said. "It's just a question of completing all of the pieces, and hopefully, later this year, we'll be able to do that."