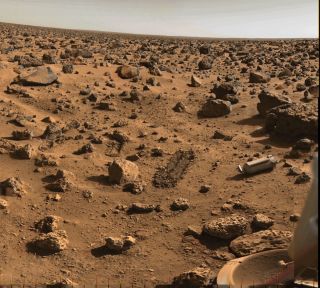 NASA's Viking 2 lander captured this view of the Utopia Planitia region on Mars.

Mars may appear to be dry and desolate, but the Red Planet can be surprisingly humid — perhaps humid enough to support life, some scientists say.

The moisture in the atmosphere of Mars could be particularly conducive to life if the water condenses out to form short-term puddles in the early morning hours.

"The conditions on Mars, where the relative humidity is high and the available water vapor is approximately 100 precipitable microns, is the equivalent of the drier parts of the Atacama Desert in Chile," John Rummel, of East Carolina University, told Space.com by email. [The Search for Life on Mars: A Photo Timeline]

Rummel reported on the location of several "special regions" on Mars — places with high potential to support Martian organisms today — during a talk the Astrobiology Science Conference in Chicago last month.

According to a 2014 report by the Mars Exploration Program Analysis Group (MEPAG) that Rummel co-authored, a special region on Mars is defined as "a region within which terrestrial organisms are likely to replicate." These areas include "any region which is interpreted to have high potential for the existence of extant Martian life forms."

Liquid water is key for the existence of life here on Earth. But Mars has very little liquid water on its surface today (though evidence suggests it once flowed in the past).

The air, however, is a different story. According to Rummel, the humidity of Mars is tied to temperature fluctuations. At night, relative humidity levels can rise to 80 to 100 percent, with the air sometimes reaching atmospheric saturation. The daytime air is far drier, due to warmer temperatures.

On Earth, some forms of life are able to survive in parched regions by poaching water from the humid air. Among these, lichens dominate, surviving in arid climates without succumbing to the dry spells that frequently occur. Some lichens in super-dry areas have been found to photosynthesize at relative humidity levels as low as 70 percent. Other research has demonstrated that a form of Antarctic lichen can adapt to life under simulated Martian conditions.

But humidity can only go so far. Although the lichen were found to metabolize through photosynthesis, no terrestrial organism has yet been discovered that can reproduce by relying on humidity alone. So far, liquid water continues to be a requirement for cell reproduction.

Does that mean game-over for any hopeful Martian lichen? Not quite, Rummel said. As temperatures on the Red Planet drop at night, he explained, water could condense into ice or snow in regions where the pressure and temperature are high enough. As temperatures rise in the early morning hours, the ice or snow could melt and eventually evaporate, a process Rummel said could take minutes to hours.

In the 1970s, NASA's Viking 2 lander observed nighttime condensation on Mars for nearly 200 days in a row, with water-frost dusting the landscape.

"Such short-term wet periods might be long enough and warm enough to allow for Earth organisms to metabolize and even reproduce," Rummel said.

Aridity isn't the only impediment to Martian life. Because Mars lacks a global magnetic field and has a thin atmosphere, radiation levels at the planet's surface could be lethal. So any putatitve Martian lichenlike organisms might be found only underground, or under rocks.

Further, Martian sunlight could transform the potentially life-sustaining liquid water into hydrogen peroxide and other oxidants, halting the reproductive cycle.

"An open landscape on that warm Mars morning would not necessarily be a great place to be," Rummel said.