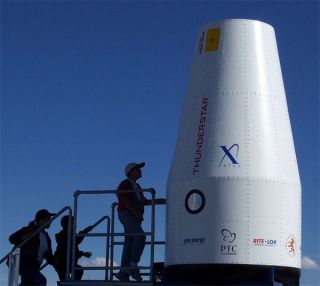 Thosecaught in the whirlwind of the personal spaceflight business--the builders, shakers,dreamers and schemers--will be found this month at the Wirefly X Prize Cup, set forOctober 20-21 in Las Cruces, New Mexico.

Giventhe sweep of hardware and plans to be detailed, it's clear that futureticket-holding space voyagers can pick from any number of vehicles to startchalking up frequent flyer mileage.

"TheWirefly X Prize Cup is a one-stop-shop where you can meet your peers, potentialcustomers, potential investors, and lot of fellow space enthusiasts ... all atthe same time," said William Pomerantz, Director of Space Projects at the XPrize Foundation in Santa Monica, California.

Pomerantznoted that the space industry has always had its fair share of conferences foracademics and hardware developers alike. The Cup is a fundamentally differentevent, though.

"It'snot an event about PowerPoint slides. It's a show for real ideas, realhardware, full-scale mock-ups, and experimental flights," Pomerantz said. "Ifyou are looking to enter the industry in any way, it's a meeting-place foreveryone you need to know and everything you need to see."

Duringthe Cup's two-day run this year, the 42-foot Canadian Arrow will be showcased,as will a full-scale replica of SpaceShipOne--the piloted rocket plane that wonthe Ansari X Prize in 2004 by flying back-to-back suborbital missions. But newdesigns and up-and-coming developers will have their hardware on display.

"Stormis currently scheduled for its first static firings from a test site in Northern England for earlyNovember," Bennett said. "The engine will be the biggest rocket engine to befired in the United Kingdom in over 35 years, since the British Government cancelled the UK national spacelaunch program in 1971," he observed.

Stormis important for Starchaser, Bennett noted, as it is the propulsion system,both for the organization's reusable Skybolt sounding rocket and for a versionof their Starchaser 5 people-carrying rocket.

StarchaserIndustries is the first private space company to establish a New Mexico presence inresponse to the development of New Mexico's spaceport. The company plans to developa 120-acre site, called Rocket City, to the west of Las Cruces in southern New Mexico.

Severalannouncements are forthcoming from Brian Feeney, Team Leader for Canada's The da VinciProject, based in Toronto, Ontario.

Feeneysaid that a new spacecraft design--designated the XF1--will be spotlighted. TheXF1 is a single person suborbital spaceflight technology demonstrator and testbed. On display, he said, is a one-third scale prototype.

"Theda Vinci Project continues to push the envelope in the field of commercialspace tourism," Feeney said. "At the X Prize Cup we will unveil the new XF1prototype spacecraft design, a one man spaceflight test bed for a two-personand nine-person commercial space tourism spacecraft."

Thefull scale XF1 is under construction now and will be ready for testing by mid2007. It will employ a new liquid rocket propulsion system. This is a wingedspace aircraft design and reflects both the technology and design approach forThe da Vinci Project's space tourism business model.

"Ithink everyone is going to be wowed when they see the XF1," Feeney proclaimed."It is a powerful new design approach for our young industry, deliberatelymaking its own unique design statement. If Ferrari were to step into the spacetourism ring...this is pretty much what you'd expect from them," he said.

"Wewill have several of our strategic partners with us," said Chuck Lauer,Director of Business Development for Rocketplane.

Forinstance, the Hokkaido Aerospace Science Technology Incubation Center (HASTIC) in Japan will be displayingthe full scale mockup of their advanced hybrid rocket, which has its firstlaunch in December, Lauer explained. "We will be adopting this rocket to use asan upper stage to be launched from the XP for microsatellite launch and otherresearch applications ... like scramjet testing."

Lauersaid that their team members will also conduct focus group interviews withvolunteer X Prize Cup attendees. What they want to glean from prospectiveRocketplane XP travelers, he continued, are "must have" space cabin features,including preference testing for different window sizes and locations in thecabin.

"Weshould be able to interview several hundred people over the two days of theevent," Lauer said. "So a small percentage of the crowd will actually be ableto participate by contributing to the design of our spaceplane interior."

TheWirefly X Prize Cup is a magnet for groups that want to showcase their businessblueprints in creating public space travel opportunities.

Forexample, space entrepreneurs from around the world will also gather in Las Cruces just prior to theX Prize Cup festivities. They'll take part in the 2nd Annual InternationalSymposium for Personal Spaceflight (ISPS 2006), to be held October 17-18.

"Ibelieve there has been great progress for the personal spaceflight industryover the past year as indicated by increasing partnerships with significantplayers including the relationship of Lockheed Martin with Bigelow Aerospace,NASA with SpaceX and Rocketplane Kistler, as well as the evolution ofSpaceDev's business," said Patricia Hynes, director of the New Mexico SpaceGrant Consortium and co-chair of the symposium.

Hynessaid the two-day ISPS is designed to highlight the rapid growth in personalspaceflight.

"Progress,potential and significant partnerships are the story this year," Hynes told SPACE.com."That's what I have seen for the vehicles, their companies and the industry...aswe get ready for the ISPS and the X Prize Cup this year."

Detailedinformation about the 2nd Annual International Symposium for PersonalSpaceflight symposium, to be held October 17-18 at the New Mexico Farm and Ranch Heritage Museum can be found onthe ISPS web site: