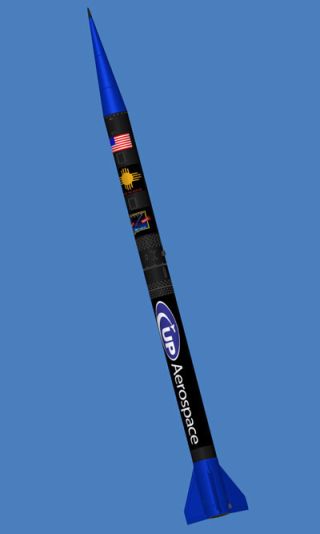 UP Aerospace will soon start flying from New Mexico spaceport site its SpaceLoft XL suborbital rocket – a key element in the firm’s business strategy to bring the cost of access to space down to Earth. Image
(Image: © UP Aerospace)

Momentumis picking up in staging the X Prize Cup, to be held October 20-21 at the LasCruces International Airport, New Mexico.

There'sa rich history of missilery in New Mexico, a state that has been witness to theground-breaking liquid-fuel rocket flights of inventor Robert Goddard and thetakeoffs of V-2 rockets from the White Sands Missile Range that boostedAmerican space exploration dreams into reality.

JerryLarson, UP Aerospace President and Launch Conductor, is thumbs up about thegroup's first flight in late September from Spaceport America, located in Upham, New Mexico.

Whiskingskyward high above Spaceport America, the rocket and its payload will reach theinternational definition of space, 62 miles (100 kilometers) in just a minuteand a half, and achieve an even higher flight apogee shortly thereafter.

"Thesite infrastructure, including our newly commissioned Launch Control Center, is ready for launch operations," Larson said. "We finished our site activationprocedures two weeks ago. All computer systems, computer networks,launch-control workstations, and intra-building and building-to-padcommunication systems are in place and have been tested and fully certified."

Stillto come at the Spaceport America site are final mission dress rehearsals,dubbed MDRs. "All team members will be reporting on station, and we'll beworking through launch countdown procedures. After our MDRs are complete, we'llgive the 'green light' to proceed to actual launch activities," Larson added.

ForUP Aerospace, with corporate headquarters in Farmington, Connecticut, the space businessis booming. Their launch schedule calls for several rocket flights this year,ramping up to a dozen flights in 2007 and roughly 30 suborbital missions for2008 and beyond. The rocket company also has its eye on a vehicle meant toplace small payloads into Earth orbit.

TheSpaceLoft XL suborbital booster offers a 110-pound (50-kilogram) payloadcapacity. The intention of the group is to bring affordability to loftingsignificant-size payloads and sophisticated experiments into space - be it forbusiness or educational spaceflight opportunities...and to fit any budget.

Foras low as just a few hundred dollars, for example, a person or company can flyinto space an experiment or payload--or even a new product, novelty, orpersonal item--and recover it safely.

Accordingto UP Aerospace officials, from project initiation to space launch can be aslittle as two months--depending on the payload availability of a selectedflight.

Over50 payloads and experiments, from across the U.S and Europe will fly on theSpaceport America's inaugural rocket flight slated for the last week ofSeptember.

"We'llbe conducting a second space launch very soon after the first," Larson pointedout. The second rocket, he said, is ready to go and carries a special payloadfor a private company.

Athird space launch of UP Aerospace will occur in tandem with the X Prize Cupevent in October. At that time, through a partnership with Space Services,Inc., the cremated remains of both James Doohan, the actor who portrayed"Scotty" in the original Star Trek series, and NASA astronaut, Gordon Cooper,will rocket out of Spaceport America. The cremated remains of at least 115other individuals will also be on that high-profile space flight, Larsonexplained.

"We'repleased to be able to inaugurate our Earth Return Service with UP Aerospace,"stated Charles Chafer, Chief Executive Officer of Space Services, headquarteredin Houston, Texas. "For some time, we've been looking for a way to provide aflown keepsake to families as a part of our Memorial Spaceflight Service."

Chaferrecalled to SPACE.com that he had spent his early years launching thefirst commercial suborbital missions from New Mexico--the Consort/Starfireseries in the mid 1980s. "It is special for us and our families to be part ofthe early years of Spaceport America," he said.